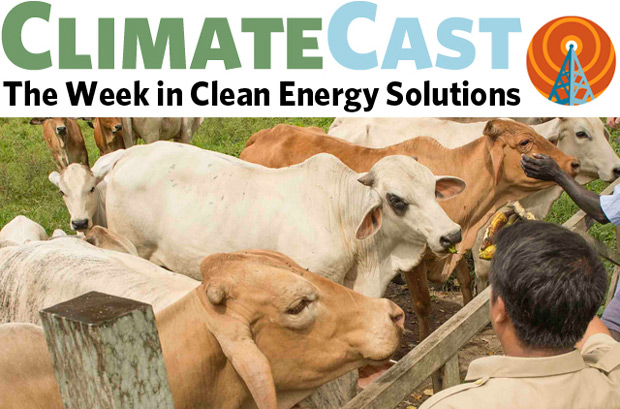 Clean Power Plan to be heard by full appeals court

The full DC Circuit Court of Appeals will hear the challenge to President Obama’s Clean Power Plan in September, instead of a three-judge panel hearing the case in June, the court announced last week. Under the new schedule, the expected appeal will go straight to the Supreme Court. The eventual verdict will mean the difference between 100 GW of coal plants being retired by 2030 if the plan stands, or 60 GW if it is defeated, according to the EIA energy outlook. Besides the climate benefits, additional closures would also translate into health benefits from improved air quality; a new study finds that the displacement of fossil fuels by solar power is already decreasing air pollution significantly.

Portugal’s electric grid ran without fossil fuels for four and a half days last week—the payoff from a decades-long effort to shift the country onto renewables. In China, leading panel-maker Trina Solar suggested a reduction in the feed-in tariff from 13 cents to 8 cents per kilowatt-hour by 2020, thanks to an expected decline in PV costs. Other innovations making solar more accessible include see-through solar cells transparent enough to use as a window covering, floating solar farms (so-called “floatovoltaics”), and mounting hardware that rests on angled roofs without the need to drill into them. Wondering whether it will work for you? Google’s Sunroof solar estimation tool is now available for 43 million roofs in 42 states. Concentrating solar power isn’t as trouble-free: one of the generating towers at Ivanpah caught fire last week when its mirrors were mis-aimed, but DOE still envisions a role for the technology because with heat storage, it can generate into the evening.

New strategies are needed so that global agriculture can do its part to stay within the climate pollution budget for a 2˚C warmer world, according to a new study in Global Change Biology. Techniques can include changing the biochemistry of cows’ digestive tracts so they produce less methane, and enhancing soil microbiota so that they lock up more carbon in the ground. Another agricultural strategy—raising bioenergy crops and capturing the carbon dioxide from their combustion when they’re burned—led to a dust-up between climate campaigners at the UN talks in Bonn last week because of disagreement over the likely impacts on farming and food prices.

Casino giant MGM last week gambled $86.9 million that it can find a better, cleaner electricity deal on the wholesale market than it gets from Nevada’s regulated utility. The exit fee keeps Nevada Power’s other customers from being stuck with the bill for the utility’s infrastructure investments; MGM accounted for nearly 5 percent of the utility’s sales. On a smaller scale, two Washington utilities stopped accepting new customers into a program that pays a bonus to customers who generate their own power. Four other utilities in the state are nearing the cap on net metering (0.5 percent of peak load). Despite concern that it shortchanges non-participants, a new Brookings Institution review found that net metering typically benefits all customers, whether they have rooftop solar or not.

The Fort McMurray fire blew past 1 million acres last week and destroyed a tar-sands work camp after all its occupants were safely evacuated. Now some camps are re-opening, and Fort McMurray residents will be able to return to their homes neighborhood by neighborhood, beginning June 1. Early last week, the fire had already cost Can$1 billion in lost oil production and released nearly one-tenth as much climate pollution as all of Canada emits in a year. Similar mega-fires are expected to increase in the boreal forest, where some areas have gone thousands of years without burning. In California, drought may become a permanent feature, and some farm-workers have already responded by migrating north to Oregon and Washington.

In brief: Climate in the media, then and now

If reminiscing about decade-old climate documentaries is your thing, don’t miss Grist’s exhaustive yet entertaining oral history of An Inconvenient Truth, Al Gore’s Oscar-winning film on the climate problem. Or contemplate a newer video drama with fresh eyes, and consider the prospect that Game of Thrones is actually an allegory to humanity’s response to the climate issue: noble houses bickering amongst themselves while an external threat bears down on them all.

Image: Cattle in Papua New Guinea, being visited by a US Navy veterinarian. Photo by Greg Badger, US Pacific Fleet.