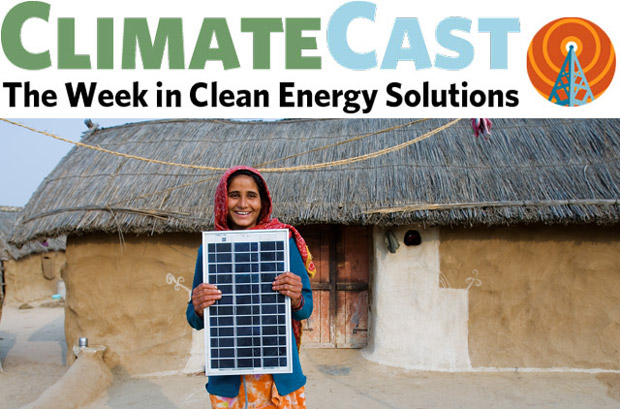 The fuel alone to operate a natural-gas power plant will cost more than PV power within a few years, according to the annual federal report on utility-scale solar, thanks to solar power’s rapidly dropping price. Already, the profitability of fossil gas plants is threatened by cheap battery storage that will reduce the demand spikes that pad profit margins during peak hours, according to a new report from Moody’s. Mindful of this trend, the CEO of the 45-GW utility NextEra predicts that energy storage will displace the need for new peak-power plants by 2020. These two trends—along with utilities’ ability to manage customer demand in real time—are leading New York to fundamentally re-invent utility regulation.

India makes climate pledge, but that’s not end of story

India pledged last week to reduce the energy intensity of its economy 33 to 35 percent and derive 40 percent of its electricity from renewables by 2030, but said it could only do so with $2.5 trillion in investment over 15 years. India was the last major emitter to offer a climate commitment ahead of the December Paris summit—pledges that have now been made by 146 countries covering 87 percent of annual carbon emissions. With two weeks before the last round of pre-summit talks, UN negotiators released a slimmed-down 20-page treaty draft, and a new chart showed that some countries are actually reducing per capita emissions.

GOP voters care more for climate than candidates do

It was a foul fortnight for fossil fuels, as a Chinese coal company cut 100,000 jobs (40 percent of its workforce), and Goldman Sachs slashed its coal price forecast from $65 to $50 per ton because of “the remote likelihood that the market will tighten ever again.” A Washington, DC “clean coal” lobby laid off half its staff, after several member utilities quit the group. Canadian oil producers are bracing for this month’s federal elections, as both opposition parties promised to eliminate a tax incentive for oil exploration, and ExxonMobil faced calls for prosecution and litigation after revelations that it has known since the late 1980s that its products disrupt the climate.

Water in all the wrong places

South Carolina began drying out from last weekend’s record flooding, caused by a storm that drew on moisture from Hurricane Joaquin to drench the area with rain totals that would normally be expected just once every 1,000 years. Unusually warm sea-surface temperatures in the Atlantic fed the storm, making it an example of how global warming can intensify an already-extreme event, said climatologist Michael Mann. In Alaska, the Yup’ik village of Newtok prepared to relocate, as melting permafrost and river flooding erode the land under people’s homes. Washington wheat farmers faced an opposite problem, with a lack of rain—and none on the horizon—delaying plans to plant winter wheat.

Over 400 institutions and 2,000 individuals have divested portfolios worth $2.6 trillion from fossil fuel investments, raising concern among institutional investors that coal and oil company assets are at risk and leading a Canadian utility CEO to complain that the dialogue over climate is “scaring investors away from Canada.” Citigroup Inc. (third-largest U.S. bank) offers no refuge to coal companies, announcing it will curtail financing for coal mining projects and calling climate change a “global challenge of tremendous magnitude.” At the seventh annual Climate Week in New York, finance panels alternated between climate change’s serious risk to company balance sheets and shareholder value and confidence in renewable energy’s increasingly attractive investment potential.

A new photovoltaic panel by SolarCity won a rating of over 22 percent efficiency, the highest of any panel in mass production. SolarCity makes the panels at a 100-megawatt-per-year pilot facility, but by 2017 will begin churning them out of its 1-gigawatt New York factory. The panels will feed SolarCity’s leasing program, but the company faces two new challenges: electric utilities in four states are starting to install PVs on customers’ buildings, and the California Office of Ratepayer Advocates last week backed a proposal to charge a monthly connection fee of up to $10 per kilowatt for rooftop solar, although utilities would still buy back excess power at retail rates, the practice known as net metering.

CNN goes deep into Texas beef country to ruminate on the climate impacts of cattle and other grazing animals. Thanks to the methane burped up by cattle as they digest the grass in their stomachs, raising a pound of beef is responsible for as much climate pollution as driving a typical American car 60 miles—far more impact than seafood, pork, chicken, or other forms of protein.

Image: This woman’s home in Rajasthan, India, was electrified by a crew of barefoot women solar engineers. Photo by Knut-Erik Helle, via Flickr.