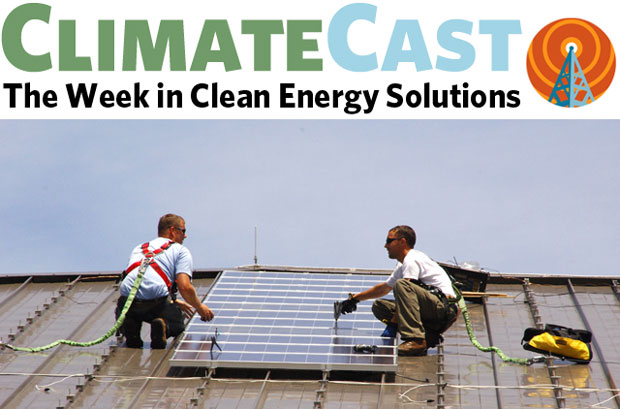 Clean energy is where the jobs are

One of the largest US unions, Service Employees International Union, voted to make climate action a priority and fight for it in the 2016 elections. Although organized labor is divided between support of clean or fossil energy, the SEIU vote puts it on the same side as the Communications Workers of America, who last week backed a bill to raise New York’s Renewable Portfolio Standard to 50 percent by 2030. Their choices put SEIU and CWA on the side of growing employment: worldwide clean energy employment grew last year to 8.1 million, according to a new report from the International Renewable Energy Agency, even as the rest of the energy sector shed jobs. The clean energy transition also includes top executives: two Australian fossil-fuel CEOs have jumped ship—one to a solar and battery storage company, the other to an energy-efficiency firm.

A Union Pacific oil train derailed Friday in the Columbia Gorge, setting four tanker cars on fire, forcing a hundred Mosier, OR residents from their homes, and spreading a sheen of oil on the river.  The accident led the local fire chief—who had previously reassured townspeople about rail safety—to call oil trains “insane.” The next day, citizens in nearby Hood River rallied to demand a ban on oil trains, and the Mosier City Council asked to halt oil shipments through town until the investigation is completed—a request Union Pacific granted on Monday. As of Sunday night, the town’s sewage treatment plant had reopened, but residents were still instructed to boil their drinking water.

Exelon will close its Clinton and Quad Cities nuclear plants in Illinois, it announced last week, after the state’s legislature adjourned without guaranteeing higher revenues for its power than it could earn through the regional electricity auction. The reactors’ inability to compete is a common problem in competitive electricity markets, affecting 15 to 20 existing plants whose closure would increase near-term carbon emissions. Meanwhile, South Carolina Electricity & Gas sought regulators’ approval of a $852 million price hike for its share of two new reactors, indicating that the 2,200-MW project will cost some $14 billion by the time it opens at the end of the decade. Nuclear advocates believe that small mass-producible modular reactors will be more economical, but public opinion is hard to sway. Positions among an audience at Stanford University were virtually unchanged after energy luminaries debated the issue there last week.

Washington’s Department of Ecology last week released a new draft of Gov. Inslee’s Clean Air Rule, which would cap carbon pollution from the state’s largest emitters and ratchet it down over the next two decades. Changes since February’s draft include provisions to shield energy-intensive industries from competitors who don’t face carbon rules and to prevent double-counting of offsets. Meanwhile, California’s and Quebec’s joint cap-and-trade auction last month revealed slackening demand for carbon allowances, with fewer than 10 percent of the offered permits bought for the minimum reserve price of $12.73 per ton. Unsold permits will be taken off the market until two consecutive quarterly auctions sell out. The weak demand stems in part from uncertainty about the program after its 2020 sunset; the auction shortfall will affect projected state revenues for projects such as high-speed rail. In the Northeast, a RGGI auction for electric power allowances sold out at $4.53 per ton.

Vast tracts of boreal permafrost may melt this century

Melting permafrost is destabilizing the ground in Alaska, replacing forests with lakes, and releasing methane as underground organic matter decays, according to a vivid article in Newsweek. Some 20 percent of the Earth’s land mass is covered with permafrost, but one-third to one-half of it is within 1.5˚C of melting, and is at risk of being lost by 2100. One researcher has even gained notoriety by finding methane seeps and torching them off. In Siberia, a kilometer-long, 300-foot-deep crater caused by melting permafrost is known as the “Gateway to the Underworld.”

The worldwide fleet of electric vehicles surpassed the 1 million mark last year, said the International Energy Agency, which finds that EVs are the one sector on track with the group’s scenario to hold global warming to 2˚C. Progress is continuing this year, with global EV sales up 42 percent in the first quarter of 2016 compared with 2015, thanks to government subsidies and cheaper batteries. In Britain, 100 Nissan EV owners this fall will pilot a program to sell electricity back to the grid from their car’s battery, while in South Africa, BMW rolled out a solar carport that can charge an EV without grid power.

Energy ministers from 23 countries met in San Francisco last week to coordinate clean energy innovation and deployment, providing a venue to cheer announcements such as India’s progress toward cheaper LED lighting and the roll-out of an ISO standard for sustainable energy management in buildings. The triumph of renewable energy is now inevitable, said US Energy Secretary Ernest Moniz, because of factors such as the plunging price of wind and solar energy, corporate interest in buying clean power, and improvements in energy efficiency. Four hundred miles south, a California subdivision is pushing these trends to their fullest extension with 20 zero-net-energy houses, a state goal for all new homes built after 2020.

Image: Workers installing photovoltaic panels on a building at Fort Dix. Photo by US Army Environmental Command, via Flickr.