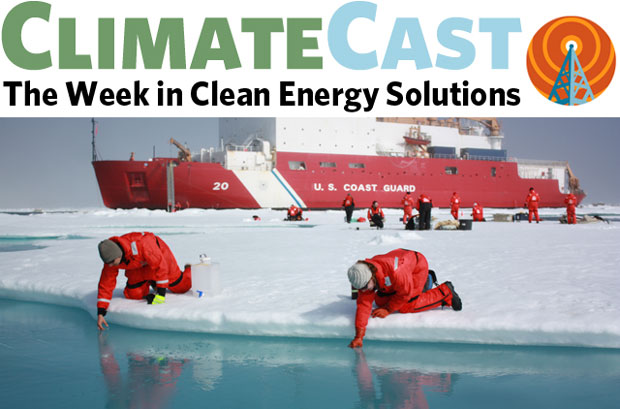 Attention ClimateCast readers: Please give us feedback on our summary of the week’s top climate and clean energy news by filling out our survey here. It will only take two minutes but your input is crucial in guiding our decisions about where to take ClimateCast next.

An auction for 750 MW of solar power in the Indian state of Madhya Pradesh closed last week with winning bids of 4.4 cents per kilowatt-hour, about 30 percent below the previous record low set a year ago. At that rate, solar is now the cheapest new power in India—lower than wind, gas or coal, eroding the prospects for new coal development or imports to serve the subcontinent’s huge unmet energy needs. In terms of employment, solar has overtaken coal in the US: the industry’s 51,000 new jobs last year pegged its workforce at twice the size of coal’s, with solar installation jobs paying an average of $26 an hour. Meanwhile, the decline of coal is increasingly irreversible, due to competition from cheap renewables and fracked gas, while coal jobs are also succumbing to mechanization and a shift to less labor-intensive strip-mining in the West. As if to underscore these trends, the utilities that own the 2,250-MW Navajo Generating Station in Arizona voted Monday to close the plant by the end of 2019.

Heat waves shatter records from Oklahoma to the Outback

Record high temperatures toasted the American South and the Antipodes last week, reaching as high as 99˚F in Oklahoma and Texas, while the mercury pushed into the 110s in Australia, triggering brush fires, power outages, and arguments about energy supply. The Arctic saw a heat wave as well, with temperatures up to 20 ˚C above seasonal norms, helping to continue this year’s alarming scarcity of sea ice. Warm ocean waters are shrinking Greenland’s glaciers, a phenomenon being studied by NASA as part of their Oceans Melting Greenland, or OMG, project. Such glacial melting could put oceanfront property at risk within 30 years, the length of a typical mortgage, according to a new study in PLOS One. In California, nearly 200,000 people were evacuated below Oroville Dam, as high flows and a damaged concrete spillway led to the first-ever use of an unarmored emergency spillway that proceeded to erode toward the crest of the dam. The swollen flows into the reservoir stemmed from intense rainstorms and warm weather that melted mid-elevation snow—both phenomena that are more common in a warmed climate.

A gang of Republican elder statesmen attracted a flurry of attention last week when they floated a proposal to tax CO2 pollution at $40 per ton, in exchange for a rollback of other regulations such as the Obama-era Clean Power Plan. The revenues would be refunded to all Americans equally, which would pay a family of four $2,000 per year to start. The proposal—from a group debuting as the “Climate Leadership Council”—was cheered as a wedge in GOP opposition to climate action, but skeptics noted that it stands little chance in the current political environment, especially since political realities have limited most carbon taxes worldwide to $15 a ton or less. The idea was slammed by the NRDC, who argued that the clean energy transition needs to be guided by more than just market signals, and also by the Right, which scoffed at the idea of accepting a tax for regulatory rollbacks just when it believes it has the political power to vaporize Obama’s rules on its own.

[Ahem, sorry to interrupt, but a little reminder to please take our survey when you’re done reading.]

Builders resumed work on the Dakota Access Pipeline last week, after President Trump ordered the Army Corps of Engineers to expedite the project’s final permit; the Corps suspended its environmental review and allowed the pipeline to pass under Lake Oahe. The Standing Rock and Cheyenne River Sioux—some of whose supporters were sought for questioning by the FBI—sued to halt construction, alleging the pipeline endangers the cleanliness of the Missouri River, thereby infringing on the tribes’ free exercise of religion. (They lost their bid for a temporary restraining order Monday; a hearing for a preliminary injunction is set for Feb. 27.) Thousands of miles away, two blows were struck at the project’s financing: the Seattle City Council voted to withdraw $3 billion in deposits from project financier Wells Fargo Bank (as did Davis, CA), and the Scandinavian bank Nordea banned investments in pipeline builder Energy Transfer Partners and related firms. In Bellingham, the proponents of the Cherry Point coal terminal withdrew their permit application, which stalled last May when the Army Corps held the project would conflict with Lummi Tribe’s treaty fishing rights.

Ahead of his expected Senate confirmation vote this week, Oklahoma Attorney-General Scott Pruitt faced a public-records suit demanding his correspondence with oil and gas companies while was responsible for enforcing their compliance with environmental laws. Pruitt is expected to work hand in glove with the Republican Congress to roll back environmental protections, including controls on climate pollution—an issue which Pruitt just last year characterized as akin to religious belief. It’s this passion for fossil fuel over renewable energy that led the Dallas News to call on the Senate to reject him, contending that clean energy will be better economically for Texas. Even before Pruitt’s confirmation, the EPA has already curtailed its staff’s participation in at least one environmental conference. Washington State Senator Doug Ericksen is serving on Trump’s EPA transition team, and is reportedly gunning for the regional EPA chief position for Alaska and the Northwest. Vox projects five possible fates for the EPA under Trump, predicting that it is more likely to be crippled by regulatory rollbacks and budget cuts than to be eliminated entirely or be stripped of its authority to regulated climate pollution.

The energy transition is blowing in the wind

Wind power crossed two symbolic thresholds last year, as its US capacity surpassed hydropower to have the most megawatts connected to the grid of any renewable power source; in Europe, wind edged out coal’s installed capacity, coming in second only to natural gas with 154 GW. While hydropower’s energy output is still higher than wind’s in the US, wind’s capacity factor (energy output as a fraction of what it would be if it ran 24/7) is steadily increasing thanks to technological improvements, and now stands at 34 percent, compared with about 40 percent for hydro, and fossil fuel factors in the mid-50s. Wind also won the support of a bipartisan coalition of governors, who wrote to President Trump urging him to back both wind and solar power.

Forty years after President Jimmy Carter donned a cardigan and told Americans from the Oval Office that the energy crisis was “the moral equivalent of war,” and 36 years after President Ronald Reagan stripped Carter’s solar panels from the White House, Carter cut the ribbon on a 1.3-MW solar installation on his family’s Georgia peanut farm. The photovoltaics will provide about half the power for his home town of Plains. Carter’s appreciation of renewable energy dates back to when he was 11 years old, and his father installed a windmill that brought running water for the first time to the home where he grew up.

[Now that you’re done reading this week’s edition: please do us the favor of taking our reader survey. It will be immensely helpful as we imagine the future of ClimateCast.]