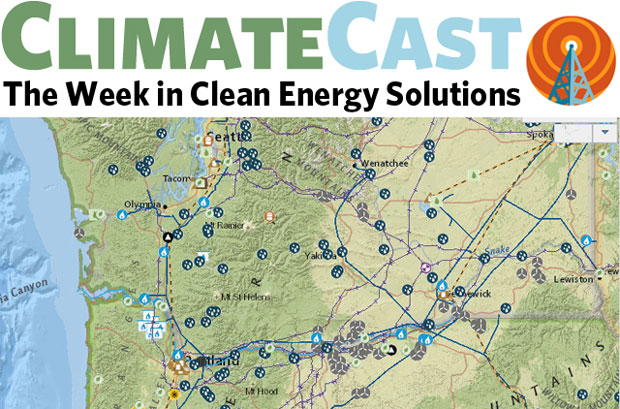 Wind and solar power could provide 80 percent of US electricity without price increases or the need for electricity storage, given better interconnection between regional power grids, says a study published last week in Nature Climate Change. The study comes on the heels of reports that the cost of European onshore windpower is now equal to coal, that solar costs will fall another 10 percent this year, and that solar and wind have won the renewable power race in Germany’s Energiewende. The optimism infected ThinkProgress’s Joe Romm, who pronounced that “the renewables revolution is now unstoppable,” and demonstrated how the extension of solar and wind tax credits will eliminate the need for new gas generation.

Recent gains aside, the US won’t achieve its 2025 climate goals without new policies, said a new report. Underscoring that assertion, California and Nevada sent rooftop solar down different paths last month. California regulators voted to make merely minor changes to rules that value rooftop power at retail rates. Meanwhile, Nevada regulators stuck by their retroactive cancellation of net metering, which sent solar firms fleeing the state, undermined clean energy’s role in Nevada’s economic development strategy, and was portrayed on BusinessWeek’s cover as the utility’s takedown of the competition. Rule changes can have massive impacts: Spain adopted a new payment system for windpower in 2013; last year, for the first time since the 1980s, not a single new megawatt of wind was installed there.

Clean tech: what will they think of next?

A Chilean company breaks ground this year on a 300-megawatt beachside clean-energy plant in the relentlessly sunny Atacama Desert. The project’s PV arrays will pump seawater uphill to a nearby plateau, then run it through a turbine when the power is needed. In Africa, several companies are combining solar panels, LED lights, advanced batteries and mobile micro-payment systems to electrify off-grid low-income households. In a bid to reduce server farms’ air-conditioning loads, Microsoft is testing whether it can install them on the sea-bed. But this year’s clean-energy innovation might not have a lasting claim on “cool”: the once-green compact fluorescent light bulb is being retired by General Electric in favor of LEDs.

The Oregon Public Utility Commission kicked the tires last week on a coalition-backed plan to transition Oregon away from coal power and toward 50 percent clean electricity. Pacific Power and Portland General Electric unveiled studies estimating that the switch would barely affect their electric rates, while Renewable Northwest predicted that rates might increase by less than 1 percent, or might even decline by as much as 2.2 percent. The negotiated plan also garnered editorial support last week from the Portland Business Journal, among others. If the Legislature does not pass the plan during the five-week session that began today, Renew Oregon has vowed to accomplish similar goals with an initiative on the November ballot.

An investment of $12.1 trillion in renewable energy over the next 25 years is required to halt the worst impacts of climate change according to a new Bloomberg New Energy Finance/Ceres report. Approximately $7 trillion of the required funds are already in the pipeline, but $5.2 trillion are yet to be identified, providing a challenge and opportunity to financial investors gathered at the United Nations last week for the Investor Summit on Climate Risk. UN Secretary General Ban Ki-moon told the 500 assembled global business leaders to double their clean energy investment in the next four years to demonstrate their strong support for the Paris climate agreement.

Efforts to increase algae’s uptake of carbon dioxide by fertilizing the Southern Ocean with iron could backfire by reducing photosynthesis elsewhere, according to a new study in Nature. That technique is just one of many proposed by geoengineering advocates to cool a warming Earth, including the high-altitude spraying of reflective aerosols to bounce sunlight back into space. Scientists have begun modeling the regional impacts of such efforts (displayed in this interactive simulation), and author Oliver Morton has gamed out the geopolitics if a few countries take matters into their own hands. Others propose “natural geoengineering,” which builds on the finding that biodiversity generally increases an ecosystem’s capacity to store carbon.

Coal’s fortunes fell further last week, as bankrupt coal firms postponed auctioning their mines for lack of prospective buyers, Vietnam announced plans to stop building new coal plants, and an Indian developer sought to switch an 800-acre Punjabi generating station it is building from coal to solar power. The coal industry’s sour mood at last week’s CoalTransUSA conference is captured in a reporter’s Storified collection of tweets, embellished with colorful GIFs. Canadian Prime Minister Justin Trudeau announced that new pipelines will be reviewed for their climate impact; on the US side of the border, the landscape of energy infrastructure, from mines to refineries and transmission lines, is laid bare in this interactive map.