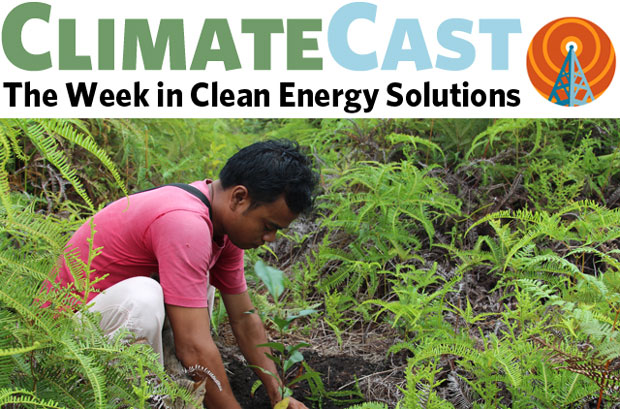 California will charge customers and suppliers who aggravate the grid’s need to ramp power plants up or down—and compensate parties who can dampen those swings. The decision will benefit both demand response and energy storage, such as the community-scale systems introduced in December that enable power sales between neighbors, as an “Airbnb of energy.” These neighborhood systems would play well in the grid as reimagined in a SolarCity white paper, in which the utility becomes a broker, not a supplier. Need a backgrounder? Vox’s David Roberts has a cogent update on the state of play in solar plus storage and a review of why these systems threaten the electric utility as we know it.

Senate progress toward an energy bill stalled last week, as Democrats insisted on including $600 million to remedy lead contamination in Flint, MI’s water supply—a deadlock that negotiators were unable to break over the weekend. The logjam followed a week of floor votes on amendments, including one that approved funding for nuclear reactor research. A particularly unpalatable piece of political gristle stipulated that bioenergy be considered climate-neutral regardless of forest management practices; still pending among the bill’s 336 amendments is a proposal to protect net-metering for rooftop solar owners. Across the Capitol Rotunda, two congressmen from southern Florida, one from each party, founded a bipartisan “Climate Solutions Caucus.”

This crazy winter we’re having

A Vermont sugar-maple operation tapped its trees on January 31, earlier than ever in its 148-year history, and the Arctic ice cap is at record-low levels for this time of year, as temperatures over the Arctic Ocean averaged 13˚F above normal. Wet weather systems are becoming scarcer in the American Southwest, according to a new study, while Arctic ice melt is being blamed for an increase in East Coast blizzards, and new research shows that Atlantic seafood species such as cod and mackerel are vulnerable to oceanic warming. In Antarctica, this austral summer may shatter a remnant of the Rhode-Island-sized Larsen Ice Shelf B, which collapsed in 2002.

The oil industry spent nearly $11 million last year defeating a proposal to halve California’s petroleum consumption, according to newly released lobbying reports. Although it won that battle, the gyrations of oil markets and the creeping success of alternatives bode poorly for oil companies, writes Amory Lovins—a market signal confirmed by the delay or cancellation of 16 Alberta tar sands projects that would have supplied 800,000 barrels a day in total. US oil suppliers would face a $10-per-barrel fee to fund transportation improvements under President Obama’s new budget, a proposal unlikely to get much traction in the GOP-controlled Congress despite its support from economists.

Putting the carbon genie back in the bottle

A wide spectrum of groups—from Peabody Coal to the Natural Resources Defense Council—is backing an extension of the federal tax credit for carbon capture and sequestration, which pays $10 to $20 per ton of CO2 prevented from making mischief with the atmosphere. Considering biological carbon storage instead, second-growth tropical forests can store carbon at rapid rates once they get established, according to a new study in Nature. Researchers drew on nearly 1,500 forest plots across the tropics and found that aboveground carbon storage reaches 90 percent of primary forest levels after an average of 66 years.

Solar hit a milestone on Kauai on four occasions last month, with over 70 percent of the Hawaiian island’s electricity coming from the sun. Combined with the island’s supply of hydropower and biomass generation, Kauai topped 90 percent generation for those periods. The accomplishment was announced last week as New York laid out plans to achieve 50 percent renewable power by 2030, and Nevadans launched an initiative to allow customers to choose their own power supplier. A team at MIT released an online mapping tool that evaluates the benefits, incentives, paybacks, and best solar array placement for any roof in any of eight pilot cities in the US.

Consider your footprint, but don’t forget to vote

Working from home might seem like a climate no-brainer, by avoiding pollution from the daily commute. But in the wintertime, heating your house during the day offsets those savings, making the home office a losing proposition for workers who live within eight miles of the office (further for mass-transit riders). Stopping for coffee on the way to work? If you take it black, your morning joe accounts for just 21 grams of carbon pollution, but a latte emits 340 grams, thanks to cows’ beefy climate impact. Regardless, the effect of personal consumption pales next to what can be achieved through politics, a point made humorously for teens in this new video.