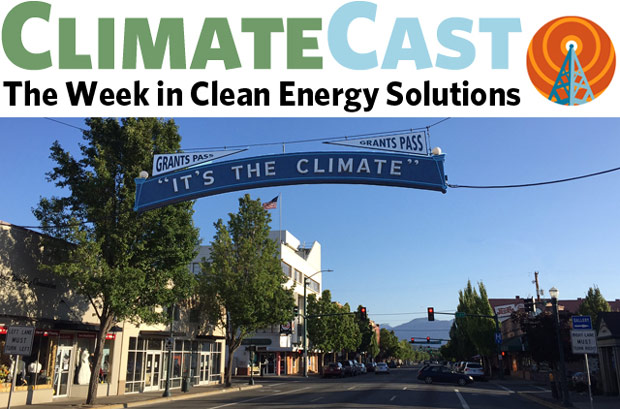 Indications of Trump on climate. Hint: not ‘open-minded’

New indications on Trump’s climate impact emerged last week, and they were far from pretty. A senior campaign adviser said NASA should pull back from climate research to focus on space, and Trump announced a series of climate-hostile appointments to his transition team. Notable examples include the Heritage Institute’s Steven Groves, who has advocated withdrawing from the Paris agreement; KT McFarland, named as deputy national security advisor, who criticized Obama for attending the Paris talks and dismisses climate change as a factor in national security; fossil fuel advocates on his team for the Interior Department; and South Carolina Gov. Nikki Haley, who determinedly dodged climate impact issues while governor, as ambassador to the United Nations. Trump also used a meeting with British politician Nigel Farage to lobby against a wind farm in the viewshed of his Scottish golf course. In the face of these actions, the New York Times seemed laughably credulous when it reported he’d had a change of heart and become “open-minded” on climate—a claim that was swiftly deconstructed by Grist, ThinkProgress, and New York. Trump’s chief of staff Reince Priebus later told Fox News that climate denial will be the Trump administration’s official policy.

Getting ready for the changing of the guard

With the clocking ticking down the last eight weeks of the Obama presidency, his administration is pushing a raft of regulatory proposals through to final approval, including rules limiting the release of methane from oil and gas drilling. But Congress—with the consent of President-elect Trump—would be able to reverse any regulation finalized since May 30 thanks to the Congressional Review Act. Final action is unlikely on the bipartisan energy bill passed earlier this year, with dirty energy hoping for a better deal from the next Congress. Trump himself could immediately reverse three dozen executive orders related to climate, including ones requiring the government to plan for climate resilience and consider climate in international development. With more lead time, Trump could undo older rules—nine top candidates are listed here. But this example from Michigan shows why all of Trump’s horses and all of his men are unlikely to rescue coal power, notwithstanding the faith still placed in him by coal country.

The island of Ta’u in American Samoa will get all of its electric power from the sun, generated from a 1.4 MW solar array to be installed by SolarCity. Thanks to a 6,000-kWh battery bank, the island’s 600 residents will be free of the diesel generators that have supplied them with electricity, saving some 110,000 gallons of fuel annually. Photovoltaics are also spreading with the help of solar showrooms in the strip malls of California’s Central Valley and a new Los Angeles program under which the city’s municipal utility will give low-income residents a $30 monthly credit on their power bill in return for letting the city mount solar panels on their roof. These examples fit with the support for clean energy that Atlantic correspondents James and Deborah Fallows have documented from Kansas to California—a finding that squares with a recent poll finding that 71 percent of Americans want the nation to stay in the Paris accords.

Real estate markets in the US Southeast are starting to reflect concerns about sea level rise, according to a New York Times analysis of home sales in low-lying areas and interviews with homeowners facing sharp rises in flood insurance premiums. A new report catalogs 19 different climate “regime shifts” caused by Arctic warming, representing changes that would be difficult to reverse even if climate pollution drops. The Arctic Resilience Report predicts impacts from Arctic thawing that reach as far away as the Indian monsoon. Looking back at the end of the last Ice Age, a new paper finds that the melting of the western Canada ice sheet 14,000 years ago shifted the jet stream 500 miles northward in under a century, desertifying the Southwest and nurturing Cascadian forests where there had been grassland.

Sioux vow to stay despite Army Corps order to vacate

The Standing Rock Sioux tribe vowed to remain encamped near the site where construction crews are laying the Dakota Access Pipeline, despite orders last week from the Army Corps of Engineers to vacate the land by December 5. The Corps later said it would not remove tribal members and their supporters forcibly from the site, but cautioned it could not provide them with emergency services. To stave off the approaching Plains winter, activists erected three tiny houses donated by Oregon supporters. Some out-of-area law enforcement agencies refused to extend mutual aid to the Morton County Sheriff’s Office as Amnesty International and the ACLU criticized violent tactics used by police, and independent journalists charged that deputies had targeted them for arrest.

Grid-connected power storage and demand-side management tools will be guaranteed fair access to electricity markets covering 60 percent of the US, according to a new ruling by the Federal Energy Regulatory Commission. The decision will require the country’s deregulated power markets to set tariffs so that any form of demand reduction or energy storage can compete in the market with power plants, which is essential to adding high levels of fluctuating solar and wind power to the grid. For similar reasons, California grid operators are looking to electric-vehicle charging as a resource—a sensible move as EV registrations increase, a trend that Bloomberg New Energy Finance believes will continue even if EV subsidies are phased out.

Pioneering indoor cannabis growers near Olympia are raising some of their plants under LED lights, as a replacement for conventional, power-hungry high-pressure sodium lamps. Not only do the lights take less power themselves, they also require less ventilation and air-conditioning. Although not as climate-friendly as growing with natural light, LED grow-lights can cut into the 250 MW increase in power demand for marijuana growing that the Northwest Power and Conservation Council expects by 2035.

Image: The arch welcoming visitors to Grants Pass, OR. Photo by Seth Zuckerman.