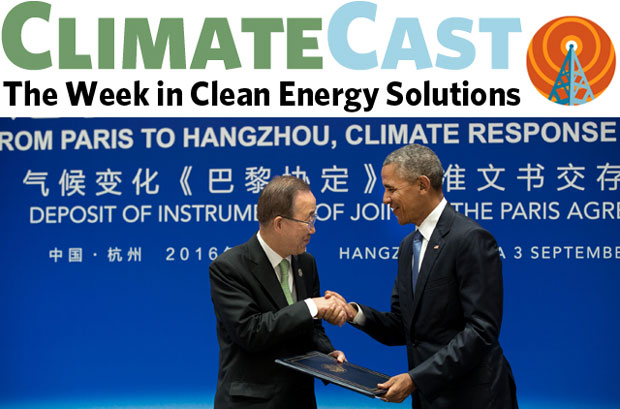 US, China ratify Paris climate accord

The Paris climate accord moved closer to reality last weekend, as top planetary emitters US and China added momentum to the process by ratifying the agreement, which will take effect once it is formally accepted by 55 countries responsible for 55 percent of world climate pollution. With the US (20.1 percent) and China (17.9) on board, the tally stands at 26 countries and 39 percent—you can simulate scenarios to make up the difference using the World Resource Institute’s neat tool, and track the signals sent by 32 more countries that they will ratify by the end of the year. China’s acceptance came through an act of its pro forma parliament Saturday; the US framed its move as an executive action implementing the original UN climate treaty, ratified by the US Senate in 1992. At the ceremony where UN Secretary General Ban Ki-Moon accepted the treaty documents, President Xi quoted an Chinese saying: “Only commitment and decision will lead to great achievement.” In contrast, President Obama explained the American decision in light of a Yankee proverb: “Put your money where your mouth is.”

Buckle your seat belts for the Great Transition

The eastern US grid could accommodate 30 percent wind, solar, and other variable renewable generation, even without cheaper energy storage or demand response by consumers at peak times, according to a new federal study. (That grid extends from Oklahoma to the Atlantic and from the Gulf Coast into Canada.) The findings—along with this summary of positive developments in cleaner energy during the Obama Administration—sow doubt about the need for projects to expand or preserve fossil generation, such as Portland General Electric’s bid to add 860 MW of new gas-fired generation (dressed up with 50 MW of PV), as well as the desperate notion of keeping Montana’s Colstrip power plant alive by outfitting it with a carbon capture and storage system—which a new DOE study finds would cost at least $1.2 billion.

Violence broke out last weekend in North Dakota at the scene of a tribal-led protest against an oil pipeline that would carry 500,000 barrels a day under the Missouri River. At least 30 people were pepper-sprayed by private security forces, and six were bitten by guard dogs in a confrontation captured on video by Democracy Now. Work was halted on part of the project Tuesday, when a federal judge issued an injunction to protect tribal cultural sites. In Oklahoma, a magnitude 5.6 earthquake struck on Saturday, one of the strongest in the state’s history, in a phenomenon that has been linked to the underground injection of wastewater from fracking. In Colorado, a pair of anti-fracking initiatives fell about 20 percent short of the signatures needed to qualify for the November ballot.

Whiskey is for drinking, the sun is for fighting

Commercial solar energy systems will be exempt from Florida property taxes for 20 years, after 73 percent of state voters approved Measure 4 last week. The vote sets the stage for the battle over November’s Measure 1, which would likely be used as a cudgel against net metering. In western Colorado, a rural electricity co-op wants to supply its customers with more solar and micro-hydropower, but its wholesale agency cites a contract that requires the co-op to buy at least 95 percent of its power from the wholesaler’s fossil-fired generating stations. So the Delta Montrose Electric Association is challenging that mandate in court, in a case that could set a precedent for hundreds of other rural co-ops.

Hurricane Hermine charged across Florida last week and then north along the eastern seaboard, bringing record flooding to North Carolina’s Outer Banks. After it crossed the Florida peninsula, it was downgraded to a “post-tropical cyclone,” but then hovered over unusually warm coastal waters, locked in place by an atmospheric pattern known as a “Rex block.” Scientists are finding that sea-level rise has made coastal flooding increasingly common even during fair weather, encrusting sidewalks with salt and displacing lawns with salt-marsh grasses, according to a lavishly illustrated New York Times article. With the Pacific also seeing typhoons packing a greater punch, insurers last week called on the G-20 nations to end fossil fuel subsidies by 2020.

Limits near on international airline emissions

International airlines would have to purchase permits to offset the growth in their carbon pollution after 2020, according to a draft plan agreed to last week by the governing council of the International Civil Aviation Organization (ICAO). The agreement would initially be voluntary, and become mandatory in 2027—a disappointment to some in the EU, where airline emissions have been excluded from cap and trade pending a global deal. The details still need to be fleshed out before the full ICAO considers the agreement in early October. For marine freight, another sector unregulated by the Paris accord, a new study suggests that financiers apply pressure to ship owners to opt for higher fuel efficiency, since it’s usually cargo owners, not ship owners, who pay the fuel bills.