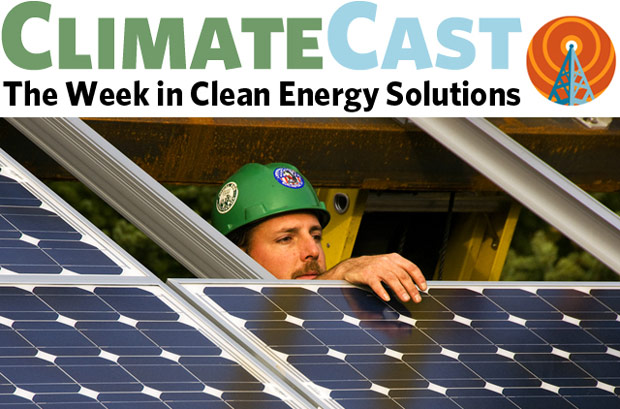 Global carbon pollution from fossil fuels remained flat in 2016 for the third straight year despite 3 percent growth in the world economy, according to new figures from the International Energy Agency. Decreases of 3 percent in the US and 1 percent in China balanced increases elsewhere in the world, with US emissions at their lowest point since 1992. Continuing to phase out fossil fuels would pay off in more than a livable climate, the International Renewable Energy Agency finds in a new report: the clean energy transition will produce a net benefit of $19 trillion worldwide by 2050 and add 0.8 percent to the global economy. Futurist Alex Steffen sees the shift to clean energy gathering momentum, with low-carbon energy gets cheaper and more desirable, making the fossil forces more brittle and dependent on measures to prop up their incumbency, such as the Trump administration’s plan to cut funding for international climate efforts.

The rising tide of climate impact and public concern

By 2100, what is now a once-in-a-century coastal flood is apt to become a nearly annual event, say researchers in a new study of European sea level rise published in Earth’s Future. Already, the impacts are being felt in coastal towns like Miami Beach and Atlantic City, NJ, which are each preparing in different ways for high water and contemplating a future in which much waterfront property becomes unusable—a realization that could cause a trillion-dollar crash in property values in the US alone. The effects have even touched two beachfront neighborhoods in Tacoma, where the Federal Emergency Management Agency revised flood maps, requiring 280 more homes to carry flood insurance to be considered creditworthy. In Kansas, fierce wildfires that residents have called “our Katrina” devastated ranchers’ cattle herds, while a consortium of 11 US medical societies issued a warning that climate change is harming human health in this country. As the impacts mount, a new Gallup poll finds the highest levels of US concern about climate ever measured: 71 percent of Americans say most scientists believe the climate is warming, and two-third of Americans say they worry about climate change “a lot” or “a fair amount.”

Fissures are starting to show in the GOP blockade of climate action, as 17 Republican members of Congress are cosponsoring a resolution that lays out a conservative case for understanding and addressing climate change. Although not enough to make up for the partisan deficit in the House of Representatives, these Republican voices suggest that climate reality is starting to create an opening with legislators in at least some red districts that have been hit hard by climate impacts in recent years. The bipartisan Climate Solutions Caucus has more than doubled this year, too, though climate advocates voiced caution about the adequacy of the solutions the Republicans are floating. Hints of change are showing at the local level, too, with the Republican mayor of Indiana’s fifth-largest city advocating energy efficiency and smart urban planning, and conservative Georgetown, TX opting to feed the city’s municipal utility entirely with wind and solar power for reasons they characterize as purely pragmatic. Red-state senators, too, are hearing a backlash against Congressional efforts to roll back rules that require gas and oil producers to control methane pollution.

Despite bumps in road, solar industry is growing

The US solar industry posted a record year in 2016, installing 14.7 GW of new capacity, nearly twice what came on line in 2015. Rooftop solar grew by 19 percent, with installations in California basically flat as the action shifted toward utility-scale solar farms. Nevertheless, for a few hours this month, nearly half the electricity consumed in California came from the sun, via 5 GW of rooftop arrays and 9 GW of solar power plants. The abundance of solar panels, combined with an extraordinary snowpack, has led the state’s grid operator to predict that it may have to curtail (turn away) up to 8 GW of power during peak production times later this spring. Google expanded Project Sunroof, its satellite-based solar assessment tool, to parts of all 50 states, but those results are just an estimate: solar installer Sungevity, which relied on satellite models for bidding while farming out installation to local contractors, declared bankruptcy last week. In West Virginia, entrepreneurs are employing retrained coal miners in solar energy businesses, one of which is called Solar Holler.

With the Trump administration’s foolhardy decision last week to reëvaluate federal fuel economy standards for cars built after 2020, the spotlight turned to auto rules in California, whose independent authority over air pollution was grandfathered in the Clean Air Act. The Golden State’s rules coexist with the federal requirements thanks to two EPA waivers: one for its limits on climate pollution and one for its zero-emission vehicle mandates that have boosted the growth in EVs. The NRDC promised a legal donnybrook if the EPA attacked those waivers, and the Los Angeles Times warned it would be a “Fort Sumter moment.” In Olympia, WA the House Environment Committee held a hearing on proposals to put a price on carbon pollution, accelerate clean energy, and help communities and fossil-fuel workers through the transition. Some prominent firms backed these bills but most of the business lobby opposed them, although they’d sung a happier tune on carbon pricing earlier that week when faced with Gov. Jay Inslee’s carbon-capping Clean Air Rule.

The Axis of Fossil

Secretary of State Rex Tillerson used an email alias of “Wayne Tracker” for eight years to discuss climate change with his colleagues when he served as CEO of Exxon Mobil, according to a court filing last week. The emails are part of the New York Attorney-General’s #ExxonKnew investigation, accusing the oil giant of concealing its possible legal liability for destabilizing the global climate. Meanwhile, a ghost-writing collaboration between Tillerson’s former employer and the Trump administration came to light last week, when more than a paragraph of an Exxon Mobil announcement appeared verbatim and without attribution in a White House press release issued near-simultaneously.

Royal Dutch Shell sold its $7 billion holdings in the Canadian tar sands, as it prepares for a future where oil is less valuable. Despite attempts by OPEC to cut production and drive up crude prices, an increase in US shale drilling brought the price below $50 a barrel. In the solid fuel department, the Port of Amsterdam is planning to stop handling coal shipments by 2030, and Peabody Energy emerged from bankruptcy into a very uncertain market for coal, in which only one thing is sure: miners’ employment will not rebound.

In brief: Looking for a few good men and women

If you’re on the cutting edge of climate action and searching for savvy new staff, where might you find people who are ready for a change? California Public Utilities Commission President Michael Picker leafleted in Washington, DC last week outside the EPA and Department of Energy, enticing prospects with fliers that read, “fight climate change — work for California” and pointing them to a special recruitment webpage.

Image: A solar installer checks the positioning of a panel. Photo courtesy of the Oregon Department of Transportation, via Flickr.