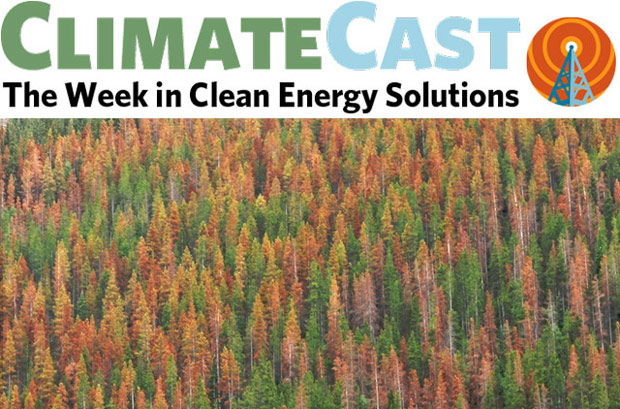 Carbon pollution from energy use held steady last year even though the world economy grew by 3 percent, the International Energy Agency announced Friday. This is the first time that flat emissions haven’t been caused by an economic slowdown. Instead, IEA credited the development to China’s decreasing coal use and growing reliance on green energy, along with clean power use and greater energy efficiency in the industrialized world. This trend matches up with a new finding that coal plant cancellations vastly outnumber new orders worldwide—part of a turnaround that is turning even Al Gore into an optimist.

Some petroleum varietals are much worse than others

Different varieties of crude oil have very different climate footprints, according to a study released last week, which found that the worst oils emit 80 percent more greenhouse gases en route to the pump than petroleum from less damaging sources. Factors that can make a fossil varietal especially bad for the climate include gases that escape or are flared during production; energy needed to refine thick crude; the distances from deposit to wellhead and refinery; and the energy needed to extract oil from nearly depleted fields. Will savvy consumers start to ask for Norway Ekofisk and Kuwait Ratawi like they now pester waiters for free-range chicken and wild salmon?

A California utility is embracing electric vehicles to maintain demand for its electrons even as increasing numbers of customers make their own solar electricity. San Diego Gas & Electric has asked regulators to let it set prices that encourage drivers to charge cars when demand is low, and has bundled the charging stations of five EV fleets together to offer 640 kW of demand management services to the California power market, garnering payments that lower drivers’ charging rates. In the UK, the rapid adoption of EVs would save drivers £1,000 a year and slash air pollution, according to a new study by Cambridge Econometrics.

California leading the way in mitigation

California regulators this month rejected a utility bid to renovate a 600-megawatt natural gas generating station, telling it to first consider renewables and conservation instead. The move was another blow for natural gas, hammered last week in a Union of Concerned Scientists report. More importantly, it signified California’s dogged efforts to decarbonize, which placed it on track to get 33% of its power from renewables by 2020, created thousands of jobs, and brought in $1 billion last month from the auction of carbon allowances. Weather is keeping Californians’ attention on climate, since the continuing drought has left the Golden State with just a year’s water in reservoirs and accessible aquifers.

Good green power news from all over

Four EU nations—Sweden, Bulgaria, Estonia and Lithuania—achieved their 2020 renewable energy targets of 16 to 49 percent six years ahead of schedule, Eurostat announced Wednesday. In the tropics, Nicaragua has leveraged solar, wind, and geothermal power to go from rolling blackouts to energy exporter in a decade, and a proposal to raise Hawaii’s Renewable Portfolio Standard to 100 percent in 2040 cleared two legislative committees on unanimous votes last week. The author of 100-percent-renewable plans for several states, Stanford professor Mark Jacobsen, explains the thinking behind his proposals in an interview, along with the reason his blueprints don’t include natural gas or nuclear power.

NASA reports that northern hemisphere temperatures pushed February’s global average temperature 0.79˚C above the long term average, making it the second warmest February in history. A new study indicates that those same hemispheric temperatures could rise 0.25˚C per decade by 2020, a level not seen for at least 1,000 years. Scientists warn that the ocean and land are becoming less successful at absorbing excess atmospheric carbon dioxide and that rising carbon dioxide levels could increase the devastation inflicted by tree-munching insects, and increasingly hot and dry conditions could cause massive forest stress and mortality.

How wind could soar, if it only had a boost

Wind power could become the “cheapest, cleanest option in all 50 states,” according to a new Energy Department study, supplying one-third of the United States’ electricity by 2050 and offering significant savings in consumer energy costs. Reliable government policies are a critical factor in building the wind industry and avoiding “boom and bust” investment cycles. If the wind industry received the same tax subsidies as fossil fuels, it would have a better chance of achieving that potential, but that appears unlikely with Republicans in Congress unlikely to renew the $13 billion yearly wind Production Tax Credit.

Climate science, so simple a 12-year-old could grasp it

High school students fanned out through the Capitol in Washington, DC, last week to confront Republican legislators, armed with a poll showing that 90 percent of 12-year-olds have concluded that climate change is real and human-caused. Coincidentally, that’s the proportion of GOP senators who hold the opposite view, for political reasons that Harvard historian Naomi Oreskes explored in an interview last week following the release of the movie version of her book, Merchants of Doubt. But not all Republicans are climate deniers: Michigan Gov. Rick Snyder last week unveiled an electricity plan that would cut carbon pollution by 30 to 40 percent in a decade through efficiency measures and renewables.

On the Climate Solutions blog: KC Golden presses the case for divestment to the University of Washington Regents, noting that the university could have saved a bundle of money had they divested when students first called for divestment, given the plunge in coal stock prices; Beth Doglio juxtaposes the Seattle Port’s decision to allow Shell Oil to house its Arctic oil drilling fleet in Seattle with that of the Longview, WA Port Commissioners who voted unanimously to reject a proposal to lease port property for a propane terminal site; Ben Serrurier observes that Republican Washington State senators appear to need a science lessons given their rejection of a bill acknowledging that human activity significantly contributes to climate change; Ross Macfarlane notes the irony of the Wyoming legislature approving a plan to transfer $1 billion in taxpayer funds to private companies in the coal industry, which can’t compete in the free market.