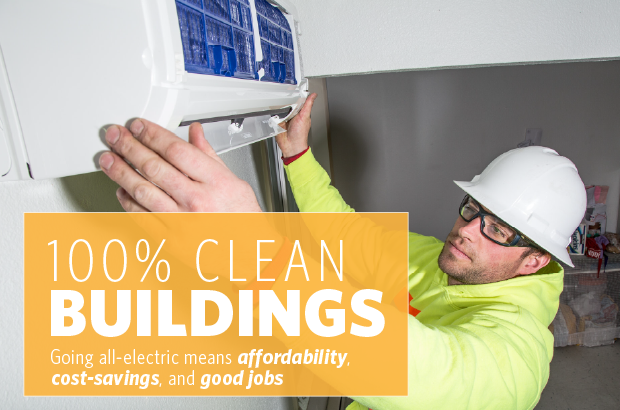 A few weeks ago, Seattle Mayor Jenny Durkan’s office came out with a dual announcement about buildings and climate change. On one hand, the most recent greenhouse gas inventory for the city showed that buildings emissions had unfortunately gone up between 2017 and 2018. On the other, Mayor Durkan’s office was also introducing a policy to eliminate most fossil fuel uses in new commercial and large multifamily buildings in Seattle.

Seattle residents rightly wondered why residential buildings weren’t included in this policy. The answer was pretty wonky: the proposed change came as part of an already-scheduled update to the Seattle’s energy code, which does not cover residential buildings. When Seattle City Council moves forward with approving the policy, it will have taken the first step towards all-electric buildings in Seattle, but there will still be work to do to make sure all buildings are covered by future policies. And that work will need to come from multiple fronts.

This last post in our series on the case for all-electric buildings covers the different types of solutions to the problems of gas and how we can get there – with the help of our communities.

The technology is here

The technology used in new all-electric buildings is not only highly energy-efficient and clean, but also comes with numerous other benefits. Heat pumps provide cooler as well as warm air, and so can help us adapt to higher summer temperatures and wildfire smoke. Induction stoves and ovens heat your food much faster and more safely, and are increasingly promoted by chefs – as well as keeping the air inside your homes cleaner. And heat pump water heaters can help improve the reliability of the electric grid by essentially acting as clean-energy batteries.

As we discussed in a previous article, all-electric new homes are also cheaper to build than homes with gas furnaces, and can eventually reduce your energy bills as more and more customers go electric. With affordable technology, there’s no reason to delay on going all-electric for new buildings.

Transitioning to all-electric: some leadership required

Moving to all-electric buildings will requires significant work from our elected officials and governments. Our local governments should follow the example of the 40 cities in California that have committed to going gas-free for new buildings, beginning with Berkeley and most recently including San Francisco. As individual cities in Washington and Oregon pass policies to go all-electric, it’s crucial that others follow to create the biggest impact (and we have some catching up to do – – in just the last three months, California has seen another four cities follow suit).

There are many policy options for how cities can begin this work, including passing ordinances to revise their buildings or land use policies, and updating their energy codes. In Washington, Seattle is making a start through the commercial energy code update, with Bellingham and Tacoma also considering moving forward in the near future on electrification legislation. In Oregon, advocates in Eugene have been working to limit the use of gas through the city’s franchise agreement with the gas utility and to mandate that all new construction be built gas free. It’s time for us to get thatis momentum going in full force here in the Pacific Northwest.

There’s also important work to be done at the state level. Washington’s 2021 legislative session began this month, and we can expect to see bills about buildings, including HB 1084/SB 5093, sponsored by Rep. Alex Ramel and supported by Governor Jay Inslee. Climate Solutions’ Washington legislative preview summarizes our top priorities for state action on buildings, including the need to grant public utilities authority to provide incentives for customers who want to switch to electric appliances, and removing preferences for gas that currently exist in state policy and in the tax structure. Similarly, Oregon’s legislative session kicks off this month and Climate Solutions is advocating for a number of buildings-related bills including a bill to enable utility customer incentives for switching to electric appliances.

In addition to the state legislature, there’s also a lot of work to be done by state agencies.  For instance, in Oregon, the Public Utility Commission recently granted utilities the authority to provide higher incentives for constructing electric buildings (which a coalition of groups including Climate Solutions supported).

Here’s the thing: the gas industry isn’t going to take this lying down. And they know that their best strategy is to convince their customers that gas isn’t as dirty, unsafe, and climate-polluting as it really is.

In fact, gas companies in Washington and Oregon, led by Bellevue-based Puget Sound Energy (PSE), are already engaged in a $1 million PR campaign to oppose policies that move us towards all-electric buildings. Their PR front, the Partnership for Energy Progress (PEP), and other gas company coalitions use many different tactics to push their message – from natural gas coloring books for children, to paying Instagram influencers to gush about their gas stoves, their misinformation is widespread.

Fortunately, we’ve already seen that calling attentions to these stealthy PR tactics can be successful. Just last month, environmental groups called on the King County Metro bus agency in Washington to remove PEP ads from the sides of buses. Climate advocates pointed out that the ads, which showed a family cooking with gas and called gas “reliable” and “affordable,”, undermined the transit agency’s commitment to reducing greenhouse gas emissions. King County Metro removed the ads and will not advertise for gas in the future.

Our climate crisis can’t wait – we need to stop digging the hole deeper by ensuring that all new buildings are electric, while also coming up with strategies and funding to transition existing buildings. You can take action: sign up for our e-newsletter or follow us on social media to stay up to date on advocacy opportunities in your city or state, and contact your local elected officials to tell them to join this movement. The push to make sure that our buildings are clean, safe, and all-electric will require our communities dispelling misinformation and speaking in favor of policies that move us off gas in an equitable and just way. 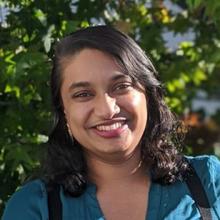 Deepa works to advance policies that will facilitate an equitable and just shift to clean energy in Washington. Deepa is passionate about ensuring that environmental justice communities are represented in local and state policy development and implementation. Prior to joining Climate Solutions, Deepa served as a project manager at the public engagement and communications firm EnviroIssues, working with local government agencies to involve communities in planning processes for transportation and urban planning projects. Deepa also has a background in environmental and electoral organizing, including advocating for wilderness protection with the Sierra Club.

Deepa holds an M.A. in Climate & Society from Columbia University, focused on climate policy and law, as well as a B.A. in Government and Women’s & Gender Studies from Georgetown University. Deepa serves on the Seattle Green New Deal Oversight Board and the Seattle Parks District Oversight Committee. Deepa also volunteers with South Asians Building Accountability & Healing (SABAH), the Coalition of Seattle Indian-Americans, and the Northwest Abortion Access Fund. Deepa was born and raised in Seattle; in free time Deepa enjoys reading and writing speculative fiction, cuddling the parents’ dog, and drinking way too much tea.

Pollution is coming… from inside the house
The surprising economics behind going all-electric (hint, the numbers are pretty good)
“This is the end of the Fossil Fuel Era, the beginning of the Clean Energy Era.”
King County makes buildings energy-smart