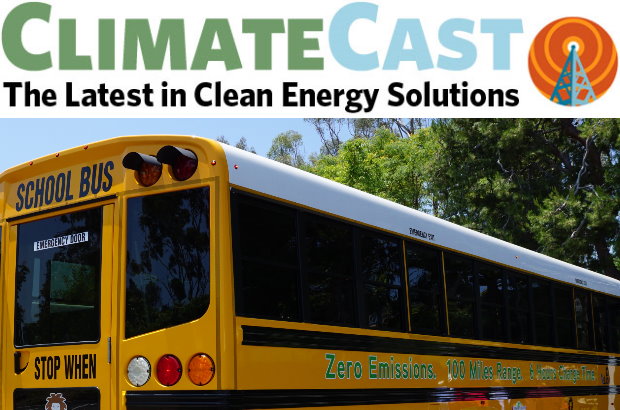 It was a year ago this week that the World Health Organization declared COVID-19 a pandemic. As we mourn those we've lost to the virus and reflect on all the ways our lives have changed, we're still struck by the salient similarities between COVID-19 and the climate crisis, and yet how society has responded so differently to one versus the other.

The wheels of the (electric) bus go round and round!

Soon enough in the future children will be able to return to in-classroom learning safely as far as the pandemic, and when they are able to, stories abound of how more kids around the country will be able to get an all-electric ride to school. The Central Kitsap School District in Washington State accelerated a clean and just transition away from gas by adding an electric touch to their school bus fleet. In addition to being much healthier for their precious cargo, zero-emission electric buses have more torque, better acceleration, and operate more quietly, so the driver can hear conversations and help with student management. School districts around the country are getting on board with electrifying their buses: Oregon's successful clean fuels program helped get that state's very first zero-emission electric school buses rolling in the Beaverton School District. Belleville, NJ students will benefit from two new electric buses that are part of their governor’s transportation electrification initiative to achieve 100% clean energy by 2050. And in Durango, CO a school district has been awarded a grant to purchase and install a fully electric school bus and related charging infrastructure. Finally, Maryland’s largest school system will add hundreds of electric bus school buses to its fleet and will become the nation's biggest operator of electric school buses, with the goal of going all electric in 14 years.

Clean fuels gains supporters (and those finally not opposing)

Efforts in Washington State to pass a Clean Fuel Standard that aligns with its West coast neighbors gained further momentum this week. Online retailer Amazon.com weighed in this week in support, and “the show of support from the state’s largest employer could deflate opponents’ arguments that the policy would damage the state’s economy” and local restaurants also voicing their support for the standard as their used cooking oil can re-blended as sustainable biofuels. Meanwhile, BP, normally and historically a major opponent, announced that they will (finally) stay neutral on the issue, removing another barrier to adopting this critical climate measure (though notably the oil industry continues to be a formidable foe on climate progress, including at the federal level).

The heat will soon be on again

As we start to turn towards spring, soon enough we’ll be faced with rising temperatures and still while the pandemic continues. Many of the country’s virus hot spots overlapped with actual “heat islands”—areas with higher temperatures than other surrounding neighborhoods as they have more concrete and less green space—and often folks living on lower incomes.

New research from the Government Accountability Office also pointed to increased temperatures as one climate impact of several that could impair the grid, highlighting needs for resiliency and grid modernization for reliability and addressing inequities.  Those with lower incomes are usually more impacted by power outages as they pay “for higher energy costs or measures to mitigate outages.”

The start of Women’s History Month has sparked many articles featuring women leaders making a difference on climate and environmental protection. Here are a few of our favorites so far that sometimes are less noticed:

lCYMI: take a few minutes to listen in on a great climate conversation! Recently, Alyssa Macy, CEO of Washington Conservation Voters and Washington Environmental Council; Don Sampson, the Climate Change Project Director with the Affiliated Tribes of Northwest Indians; and Mike Brune, the Executive Director of the Sierra Club joined our ED Gregg Small to discuss federal and tribal action in the new year.

Check out what they had to say about opportunities at the national, tribal and state levels in the latest installment of Climate Leaders Live! New Moves for Climate Progress

Sleuthing for truth during power outages
As seen on TV: the future of cars is electric
Transition 2021 off to a good start
High hopes and great expectations: a political shift on climate