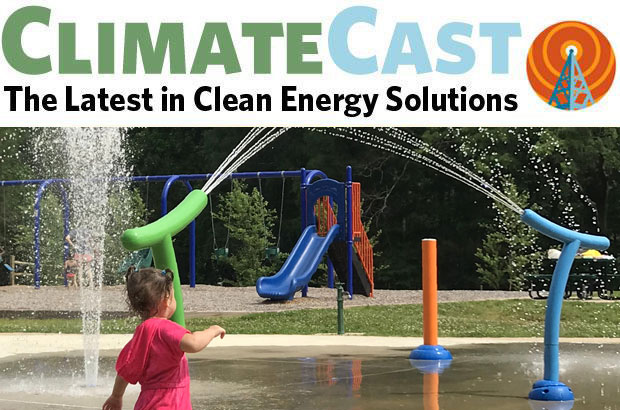 VIRGINIA STATE PARKS
Are we in a climate emergency? How is that not a dumb question?
Jonathan Lawson
July 28, 2022

“Every few years, American politics just astonishes you,” climate journalist Robinson Meyer wrote in The Atlantic this morning, responding to the news that Senator Joe Manchin and Majority Leader Chuck Schumer announced agreement on a bill which would reduce carbon emissions by roughly 40% by 2030 and invest $369 billion in climate change and energy security programs over ten years. The deal—which would produce the most significant climate bill in the nation's history—is the latest reversal from Manchin, whose broad opposition to progressive climate policy has stalled Congressional action for two years.

News of the bill prompted immediate enthusiasm from climate advocates; energy policy expert Leah Stokes called it “an absolutely transformative package.” Details are still trickling out, but the bill includes an array of tax credits designed to supercharge the transition to clean electricity and make EVs and heat pumps more affordable, along with measures to decarbonize heavy industry. (The bill also includes support and assurances for the fossil fuel industry—ensuring more battles over gas pipelines and offshore drilling to come.)

The plan will still face an uncertain path through the Senate. All 50 Republicans are expected to oppose the bill, making Democratic Senator Kyrsten Sinema the main remaining wild card.

Want to get into the details? Ben Beachy (Blue-Green Alliance) has created a detailed spreadsheet comparing the new language to the provisions of the earlier Build Back Better bill.

Are we in a climate emergency? How is that not a dumb question?

The week before Schumer and Manchin came to an agreement, hopes for federal climate progress were focused on President Biden and the possibilities for executive action. Many urged Biden to declare an official climate emergency. Stopping short of that technical step, Biden rebuked congressional inaction and announced plans to “turn the climate crisis into an opportunity,” starting with a set of clean energy and climate justice executive orders to lower electricity bills for lower-income families, advance community solar projects, improve community resilience to climate impacts like extreme heat, and create new clean energy jobs.

Numerous commentators were quick to detail additional climate actions the administration could take without congressional support. Climate policy experts Jean Su and Maya Golden-Krasner issued a report called “The Climate President’s Emergency Powers,” and discussed their recommendations with David Roberts on his podcast Volts. Executive action on clean energy will be required if the U.S. hopes to meet the Biden administration’s climate progress goals, which the new Senate bill will not accomplish on its own.

Meanwhile, authors Rebecca Solnit and Terry Tempest Williams made clear in a new essay that we can’t wait for government officials to declare a climate emergency—we need to declare it ourselves. “As people in solidarity with all life… we join those around the world who have already declared a climate emergency, and we invite everyone to join us."

We’re all feeling the heat, but not to the same degree

It was hot when we wrote the previous edition of ClimateCast, and it’s still hot; maybe even hotter. The Northwest is in the middle of a “searing” heat wave; in fact most of the US has been sweating in 90-degree heat or hotter this week. Global temperatures are pushing into the extremes with China experiencing unbearable heat and locations across Europe suffering extreme heat multiplied by wildfire risks. Heat wave-intensified wildfire is a familiar and devastating climate impact felt throughout the Western U.S., and this month’s fire in Yosemite bears the fingerprints of climate change and intense drought.

These record temperatures continue to demonstrate the need to act to reduce climate pollution, especially obvious given the heat waves’ death toll so far; more than 2,000 people have died in Spain and Portugal alone, a number expected to climb when data is released from the rest of Europe. Our response and actions to mitigate extreme heat can determine how many will die and the level of disruption to daily life. After the 2021 heat dome, Northwest local and state authorities pledged they would be ready for the next temperature spike, in part by delivering cooling units to low-income residents. Extreme heat is a health equity issue at its core (Who has access to cooling? Who has protections in outdoor work?) with burdens distributed unequally due to environmental inequality and racism.

Heat pumps are cool, in every sense

As record-breaking summer heat waves bake entire regions of the world, air conditioning is a solidly important part of relief from the heat. However, conventional air conditioners consume massive amounts of energy and utilize refrigerants that are climate pollutants in their own right. Electric heat pumps can replace conventional air conditioners and furnaces with a single, high-efficiency appliance that maintains a comfortable indoor temperature year-round. Numerous studies have shown that electric heat pumps are the most efficient and cost-effective climate control option for many American households, yet their adoption in North America has lagged for a number of reasons: affordability, homeowners and landlords' lack of awareness of the benefits, and lack of support from many HVAC installers.

One thing you can do: stay aware of your local cooling strategies

As the latest Pacific Northwest heat wave continues, learn about community resources available to help you and your neighbors stay cool:

🏞️ Lakes, rivers, and beaches (always wear a personal flotation device when out on the water!)

For more information, just search the web for "heat relief [YOUR CITY OR COUNTY] [YOUR STATE]".