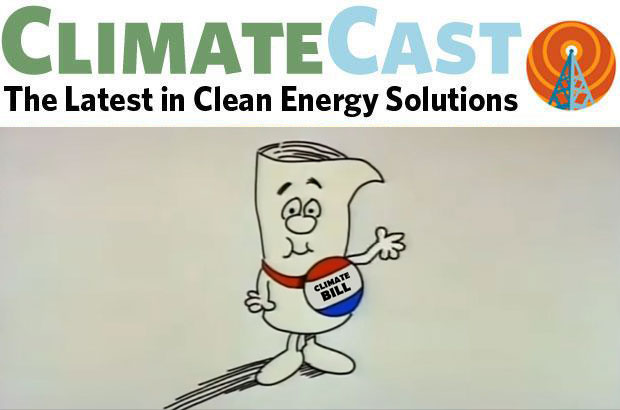 A climate bill such as we’ve never seen

It’s been 166 years since scientist Eunice Newton Foote first published her theory that sunlight tends to warm atmospheric carbon dioxide. Compared with that timespan, the 30 years it’s taken the US Congress to pass meaningful climate legislation might not seem like such a long wait. But cheers and sighs of relief greeted the Senate’s passage last week of the Inflation Reduction Act, a major bill providing for some $369 billion in climate and clean energy investments (the House is expected also to pass the bill this week, clearing the way for the president’s signature).

Analysis from the Rhodium Group suggests that, on its own, the IRA should be able to cut US net greenhouse gas emissions 40% (compared to 2005 levels) by 2030, putting the nation within striking distance of meeting its pollution targets defined in the Paris climate agreement. Additional action will be needed to close the gap; Climate Solutions’ Gregg Small credits the massive federal investments in the IRA with providing the key fourth pillar needed for a meaningful US response to climate change, alongside state-level policies, private sector commitments, and local climate action.

The IRA stands to transform the market for home electrification and efficiency, says Donnell Baird of BlocPower, with tens of billions of dollars in federal rebates, tax incentives, grants and lending capacity to make home energy transitions more affordable for low- and middle-income households. EV buyers will benefit from tax credits (for some domestic vehicles). The bill also includes provisions to help boost domestic clean-energy manufacturing, grow the crucial energy storage industry and vehicle fleet electrification, as well as helping to decarbonize air travel and agriculture. It will also help expand offshore wind in several states currently blocked from action by the Trump administration.

Clean energy investments have gotten a boost from other legislation during this Congress, including a major infrastructure bill and the recently-signed CHIPS and Science Act, providing $67 billion in investments in clean energy technology.

Here’s more on what the IRA could mean for Washington and Oregon.

Real problems: too much fossil fuels, not enough climate justice

Bill McKibben noted that passage of the IRA may highlight the growing strength of the climate movement, but also “the lingering power of the fossil-fuel industry,” manifested in the bill’s multiple “gifts” and concessions to the oil and gas industries, negotiated in by coal-enriched Senator Joe Manchin. Those private deals include offering new leases for fossil fuel exploration in the Gulf of Mexico and Alaska, major exemptions to fees targeting methane emissions and—in a side deal—clearing a path for construction of a controversial West Virginia gas pipeline.

The steps-backward measures slipped into the IRA are hard to swallow for many climate advocates; as longtime climate leader KC Golden has said, when you’re in a hole, the first thing you should do is stop digging. But it’s not actually clear what impact some of those provisions will have. Offering new oil and gas leases on federal land doesn’t ensure that fossil fuel companies will want to drill, given industry priorities and changing economics.

Still, the lease provisions fly in the face of what climate justice organizers have been pushing the Biden Administration to do since 2021—to ban offshore drilling, in order to protect the Indigenous communities and communities of color placed at risk by the environmental degradation that comes with fossil fuel development. Those concerns have led a coalition of climate justice groups to conclude that the IRA may actually do more harm than good, and to renew calls for President Biden to declare a climate emergency, clearing the way for additional executive action on climate.

The bill does include a host of provisions specifically designed to address environmental injustice, including cleanup of polluted sites, grants for community-led climate justice projects, and measures to reduce air pollution in frontline communities. Climate journalist Kate Aronoff observes that “multiple things can be true at the same time.” While the IRA is a historic achievement, “it also consigns more people to living next to more fossil fuel infrastructure for longer; in many cases, that means consigning more people—predominantly poor people, Black people, and brown people—to disease and death.” She concludes that “we don’t fully know what the bill will do. The IRA doesn’t close the book on U.S. climate policy so much as open it. As ever, the best guides to navigating what comes next will likely be the people who won it in the first place, and who’ll have to live the closest to its consequences.”

Muddy water taking back the land

Earlier this summer, climate change brought the heat, with record-setting temperatures felt everywhere on Earth. This last week came the rains with some of the heaviest precipitation seen in decades falling across the globe including in Pakistan, Sudan, Death Valley, California, and South Korea where a record and deadly 15 inches of rain fell in less than 24 hours in Seoul. Mirroring the basement flooding portrayed in the feature film Parasite (2019), the recent climate-fueled mega-flooding highlighted low-income communities on the frontlines of climate impacts with hundreds of thousands living at-risk in semi-basement dwellings in Korea’s capital. Extreme rainfall and flash flooding left Kentucky with a rising death toll and damaged infrastructure. While Central Appalachia is familiar with seasonal flooding, the infrastructure woes are symptomatic of the region’s history of reliance on fossil-fuel extraction. The departure of coal companies left a rural population stretched thin with a diminishing tax base and revenues to reinvest in water lines, roads, and other vital infrastructure.

The list of states and local jurisdictions across America adopting climate action and clean energy policies continues to grow. Youth climate activists in Florida have reason to celebrate as the Sunshine State is on the cusp of adopting a 100 percent clean energy commitment to be fulfilled by the year 2050. The city of Chicago has announced a commitment to power all city buildings and operations with 100 percent renewable energy by the year 2025, an unprecedented goal for such a large city.

While the City of San Diego, CA unveiled an ambitious new climate action plan, the city government is still under pressure to deliver on the commitments in its previous plan obligations. Also this week, the California Energy Commission voted to adopt the most ambitious goals in the country for offshore wind power.

On the CS blog

Are we in a climate emergency? How is that not a dumb question?
Climate + cosmos = 💌
Supreme Court versus a livable future
Biden invokes war powers to speed clean energy shift