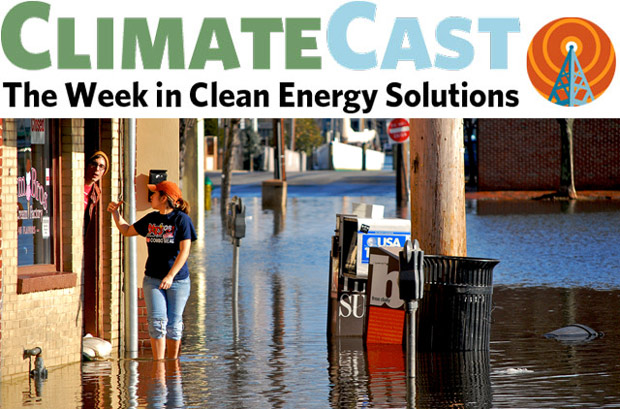 Washington Gov. Jay Inslee last week laid out a plan to cap the state’s carbon dioxide pollution and auction the right to emit it among Washington’s 130 largest utilities, refiners, and industrial combusters. Inslee estimates the auction would raise $1 billion a year to fund education and transportation. In addition, he proposed policies to back electric vehicles, energy efficiency, and renewable energy research and development. His plan faces headwinds in the GOP-led state senate but won praise for its straightforwardness—putting all pollution allowances up for auction, and covering 85 percent of the state’s emissions from the program’s inception in 2016.

Last month’s sale of carbon pollution permits by California and Quebec raised more than $400 million in the jurisdictions’ first joint auction of their combined carbon market. Prices rose 5 percent compared to California’s previous auction, to $12.10 a ton. In Europe, where a surfeit of free allowances has depressed prices for the last few years, the cost of emitting a ton of CO2 edged up to $8.77, with analysts projecting further increases in the first half of 2015. Alberta extended its carbon tax, and Massachusetts released a study backing one, although it is unclear how the idea will fare under that state’s new Republican governor.

The U.S. Commerce Department imposed stiff tariffs last week on the import of Chinese solar panels, based on accusations that the panels were being sold below their cost of production. But the decision revealed a bitter split among solar industry groups between panel-makers (who sought trade protection) and installers (who benefitted by obtaining panels as cheaply as possible). Solar progress overseas was unaffected by this kerfuffle, with India securing financing for the largest solar installation in the world, a $1.3 billion, 750 MW project. Meanwhile, Korea is launching its first floating solar power plant, which rotates in the water to track the sun.

Americans’ driving is becoming less important to the health of the U.S. economy, according to new research showing that the number of vehicle-miles traveled per unit of GNP has dropped 20 percent since it peaked in 1977. Transportation engineers overestimate the new trips that development will cause, says another professor, leading to more road construction than needed, and transit agencies are reporting increased ridership. These findings lend ammunition to critics who would jettison complex highway projects like Seattle’s stalled waterfront tunnel, and to San Diego activists who’ve halted the region’s transportation planning because its focus on auto travel would undermine the state’s climate goals.

The horse race between alternative-energy vehicles heated up last week, as Toyota came out in full-throttled support of hydrogen-powered cars like its newly launched Mirai sedan, while Honda prepared to unveil a hydrogen car in Detroit. In the electric lane, a Deutsche Bank analysis predicts EVs will undercut gas models once mpg requirements drive up the cost of internal combustion and technological progress makes EVs cheaper. But the two technologies share a common challenge: their operation is only as carbon-free as the energy used to make their fuel, and a new study showed EVs running on coal power are worse for human health than gasoline models.

Warmer weather reduces worker productivity, according to a new study. Per capita income declined by nearly $15 a day when average daily temperatures topped 75 degrees, meaning that global warming is apt to reduce wages. The study parallels other research published last week, predicting an 18 percent drop in food production as a result of climate change. Sea level rise is already causing more than a month per year of “nuisance flooding” in Washington, DC and two other eastern cities, with a dozen more cities expected to reach that mark by 2030. But climate mitigation is increasing employment: renewable electricity gained jobs since 2011, while other power sectors lost workers.

President Obama spoke out last week more clearly than ever on the reasons the Keystone XL pipeline offers little to American gasoline consumers, even apart from its damage to the global climate. His references to the larger forces driving the world oil market were especially topical in a week when articles probed the inherent susceptibility of oil prices to wide swings and the Saudis’ calculus that letting oil prices plummet would shake up higher-cost shale oil producers and maximize their market share, even as many of their fellow OPEC members were counting on loftier prices to prop up their national budgets.

Wind and solar less risky than other power projects

Wind and solar projects are less likely to go over budget than nuclear power, fossil fuel plants, or large hydro, and had smaller cost overruns when they did exceed their planned costs, according to recently published research. In general, larger projects were more apt to bust their budgets, the authors found. The exception was nuclear power, which was prone to overruns regardless of the project’s size—a phenomenon at work for French and Finnish nukes currently under construction. U.S. wind power suffered the effects of political gridlock, however, with Congress approving an extension of the federal tax credit for 2014 just two weeks before year’s end.

On the Climate Solutions blog: Environmental and business leaders voice their support for Gov. Jay Inslee’s climate plan, and Climate Solutions’ Washington state director Jessica Finn Coven asks Washingtonians to contact their legislators in its support. Savitha Reddy Pathi marks the 350th day of 2014 by asking for your support of our work for climate action.