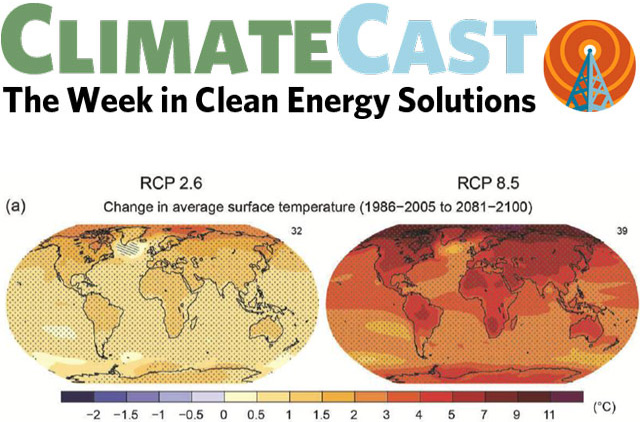 The world must rein in CO2 emissions or render the planet unlivable, according to a synthesis of the best available science adopted by the UN’s IPCC panel in Copenhagen last weekend. The scientists stood firm against pressure from the U.S. and India to remove a carbon budget from their findings, which will be exhausted in two or three decades if current trends continue. The panel may even be low-balling the risks, because of biases built in to their process. The good news: transitioning off fossil fuels — at a net investment of $220 billion per year — will shave annual economic growth by just 0.06 percent, not counting the benefits of unflooded cities, unburned forests, and adequately watered crops.

Races to watch from a climate perspective

Rep. Fred Upton (R-MI), who led the House Energy and Commerce Committee’s witch-hunt of the Solyndra loan, is facing an unexpectedly stiff challenge, despite $2.1 million in his war chest from Big Carbon. The spotlight is on solar in the Florida governor’s race, with Gov. Rick Scott rebuffing accusations that his close ties to utilities are why sunny Florida ranks 18th in the nation in solar installations. A recent poll found 54 percent of voters in five swing states prefer candidates who will address climate change and 68 percent favor those who’d expand clean energy, but that may not sway their votes, since they rate those issues of low priority.

Tom Steyer is no Charles or David Koch

Media stories proclaim major environmental groups “a formidable foe” in the mid-term elections, in large part due to hedge-fund operator turned climate activist Tom Steyer, who, with contributions of $58 million, led the pack in a round-up of the biggest independent expenditure committees. His $1.25 million to Washington State legislative candidates injected climate into the debate and helped make the 2014 fight for Senate control one of the costliest in state history. But articles equating Steyer’s wealth and political influence with that of the Koch brothers is a false equivalency: Steyer and green groups wield nowhere near the money or influence of the Koch enterprise.

Look to the young for movement on climate

Climate action may fare better at the ballot box when Millennials comprise more of the electorate, according to a poll that found broad support among voters under 35 for reducing carbon emissions and expanding renewables. In contrast, respondents over 65 backed oil and gas development and the Keystone pipeline. This tendency doesn’t extend to the next generation of the Bush family, however. President George W. Bush’s nephew, running for Texas land commissioner, clings to the “I’m no scientist” dodge that has become a popular Republican refuge. There’s hope for younger ones, though: climate science appears to counteract political ideology and overcome skepticism among adolescents, according to a new study.

Volkswagen will produce over 20 models of battery-powered and hybrid cars for the Chinese market by 2018, drawn by the government’s target of putting 5 million such vehicles on the road this decade. By contrast, Toyota is placing a bigger bet on hydrogen-powered fuel cell cars, though it has taken heat for its dismissive attitude toward electric sedans. Whether automakers draw on hydrogen or electricity, this critique of “miles per gallon” as the yardstick of fuel efficiency will become less relevant, but Oregon’s experiment in supporting road maintenance with a tax on miles driven instead of gasoline purchased may become more relevant.

An Oregon photovoltaics maker announced last week that it will expand its Portland-area factory by nearly 40 percent because of increased demand for its solar cells, adding 200 employees to bring its workforce to nearly 1,000. The expansion comes as solar panels become a more normal fixture in the marketplace, going on sale at Dutch Ikea stores, and performing so well that in Hawaii, a few consumers have used solar and batteries to go off the grid. Demand for larger, utility-scale electricity storage has driven the rebirth of a North Carolina cigarette plant as a battery factory—a development that could compete by 2018 with gas-fired peaker plants.

Three major U.S. banks have promised not to finance an expansion of a coal port near Australia’s Great Barrier Reef, bowing to activists who oppose the project for its climate impact and its expected degradation of the reef. The campaign against bank financing came as BankTrack released figures showing that private bank lending to coal projects has quadrupled since 2005, as development banks shied away from the projects because of their climate consequences. On the equity side, the drop in petroleum prices has cut profits in the oil sector, strengthening the hand of activists lobbying colleges to divest their endowments of fossil fuel holdings.

The installation of renewable energy in developing countries is growing nearly twice as fast as in wealthier nations, according to a survey released last week by Climatescope’s study of 55 nations. Economic considerations often drive green power’s success, giving the lie to the claim trumpeted by “skeptical” “environmentalist” Bjorn Lomborg that fossil fuels are necessary to lift the world’s poor to prosperity. In the U.S., the fossil lobby has tried to wrap itself in the mantle of economic fairness to erect barriers to rooftop solar, but was recently unmasked as an Astroturf campaign in Wisconsin.

A political consultant to the oil and gas industry advised a Western Energy Alliance conference last June to play dirty to block campaigns against fracking, because they face the choice of “winning ugly or losing pretty,” according to a recording of his talk leaked to The New York Times by a disaffected conference participant. The consultant, Richard Berman, invited contributions to support his “Big Green Radicals” website, assuring prospective donors that they could remain anonymous. Another tidbit of his advice: include kids and animals in web videos if you want them to go viral. Priceless.

On the Climate Solutions blog: Audio highlights of last week’s Washington Business Climate Declaration, an action alert for public comment on Oregon’s clean fuels standard, and a reminder that Tuesday is Election Day, and the last day to return your ballot.