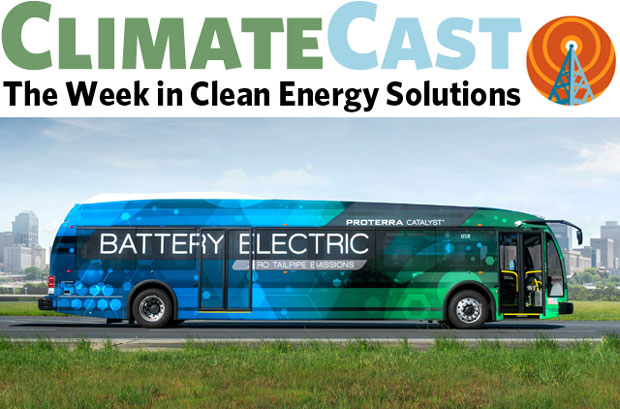 Globally, renewable energy attracted 70 percent of last year’s investments in electricity generation, reports the International Energy Agency. While the annual investment—$288 billion in 2015—was 2 percent lower than in 2011, it yielded 40 percent more capacity because wind and solar prices have decreased. The IEA discerns a “broad shift of spending toward cleaner energy,” including enough investment in wind, solar, and electric vehicles to put the world on track to just 2˚C of warming. The rising market share of wind and solar power is making coal and natural-gas generation more expensive, according to a new report from the Carbon Tracker Initiative. As clean energy displaces the fossil-fired variety, the thermal plants’ fixed costs are spread over less generation, raising its price per kilowatt-hour. And ExxonMobil is under investigation for failing to re-assess the balance-sheet value of its reserves since the drastic oil-price drop of 2014.

From coast to coast, executive action on climate

Gov. Jay Inslee finalized Washington’s Clean Air Rule last week, requiring the state’s 24 most climate-polluting entities to ratchet down their emissions of greenhouse gases 1.7 percent annually or buy credits from those who do. Over time, more companies would come under regulation. While the state Department of Ecology touted the rule as the “first of its kind,” environmental and clean energy groups gave it a more qualified welcome, noting how much more ambitious CO2 reductions must still become. In Massachusetts, Republican Gov. Charlie Baker started down a similar path, following a court order by telling state agencies to meet goals adopted by state legislation in 2008, requiring a 20 percent cut below 1990 levels by 2020. North of the 49th parallel, Canada’s Environment Minister promised to set a minimum national price on carbon, while allowing provinces to go further if they prefer.

The importance of being electric

The last hydrocarbon car will have to be sold by 2035 to meet international climate goals, according to a Climate Action Tracker report released last week. As a signpost of progress, electric vehicle sales for the first half of this year rose 49 percent compared with 2015, with the most dramatic increase in China, where sales more than doubled.   In the US, consumer interest in EVs is up, but low gas prices and gasoline cars’ improved fuel economy have dampened sales of EVs and hybrids in California. Proterra unveiled a battery-powered bus that goes 350 miles on a single charge, while Nissan pokes fun at the absurdity of gasoline-powered lives in this ad—an amusing complement to a more serious discussion of electrifying transportation and space-conditioning as a route to zero carbon.

Solar net-metering struggles with its own success

Nevada solar owners who’d installed their rooftop systems by the end of 2015 will regain the net-metering arrangement that prevailed when they connected to the grid, according to a deal struck last week between NV Energy and SolarCity. In Maine, the Public Utilities Commission proposed grandfathering current solar owners for 15 more years, while allowing new solar installations just 10 years of net metering. These adjustments reflect the success of solar power, led by Hawaii, where 17 percent of ratepayers have rooftop solar. Last year, regulators there replaced net metering for new customers with a tariff that pays a lower rate of 15 to 28 cents per kilowatt-hour exported to the grid—but the cap for that new tariff was reached last month, after less than a year. Meanwhile, Congress launched an investigation of third-party solar firms’ use of federal tax credits, examining whether they overstated the PV systems’ value, enabling them to claim 30 percent of an unfairly large number.

The political climate on climate this election season

The divide between Democrats’ and Republicans’ public opinion and voting records on climate is wider than it has ever been, according to a newly published sociology study, while a study by Media Matters pinned some of the blame on slanted coverage in The Wall Street Journal. Vox’s David Roberts identifies bridges across that chasm, suggesting that the causes of Iowa wind and Florida solar power could appeal to the right, while conservatives convene a “clean energy summit” this week in Washington, DC. A new poll shows that 71 percent of Americans want the government to tackle global warming, but only 39 percent are willing to spend an extra $10 per month to that end.

When it rains, now it really pours

Researchers are starting to reach swifter conclusions about the links between global warming and damaging heat waves, droughts, and precipitation events, according to scientists interviewed by Inside Climate News. One such “rapid attribution study” was done in Louisiana, where last month’s heavy rains also showed that FEMA flood risk maps are out of date. In New York City, planners are grappling with the eventual impacts of several feet of sea level rise, which have already made it impossible for the subway system to purchase conventional insurance, but Grist’s Ben Adler contemplates the impracticality of abandoning the Gotham waterfront.

Clean energy comes to the world of fabric

Solar cells can be woven into fabric, thanks to a new process developed by a chemist and a designer who teamed up at the University of Wisconsin. Their solar cell is made by depositing four kinds of polymers onto the cloth; they’ve also pioneered a fabric that generates power from being waved about in the breeze. At Stanford, engineering researchers have developed an opaque, breathable polyethylene that helps cool the body, making air conditioning less necessary. Wear this fabric, and your skin will be a couple of degrees cooler than under cotton, although not as cool as if you were wearing nothing. On the other hand, that would run the risk of being NSFW.