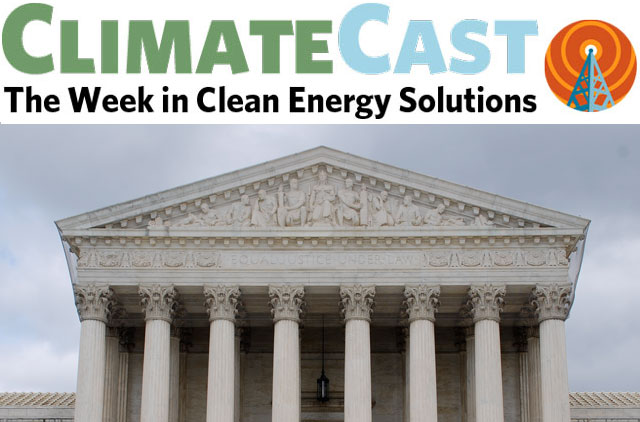 Climate action had a good week in court, winning four key rulings. The US Supreme Court upheld the EPA’s right to regulate greenhouse gas emissions, although it exempted a few stationary sources from the agency’s reach. The justices also rejected a challenge to California’s Low-Carbon Fuel Standard without even hearing the case. Canada’s top court recognized aboriginal land claims in a sweeping, unanimous ruling, which will give First Nations greater leverage to oppose pipelines such as the Northern Gateway across their territories. And a district judge blocked a coal mine’s expansion because its environmental review didn’t count the social cost of carbon.

Concerns about the fairness of carbon pricing jumped to the forefront last week. California passed a budget dedicating over a quarter of its $872 million in carbon auction revenues to environmental justice concerns, improving air quality, and access to public transit in cities—full shopping list here. Looking ahead to next year when motor fuels come under California’s cap, 16 CA state legislators asked to change the rules so that cap-and-trade doesn’t boost gasoline prices, which would rise by about 15 cents a gallon at current carbon prices. President Obama, too, said policy should reflect a concern for the impact of carbon pricing on working families.

It’s all about the climate Benjamins

The business perspective on climate got gallons of ink last week, with a World Bank report showing that measures to reduce carbon emissions (such as bus lanes or efficient cookstoves) would boost economic growth over coming decades, not reduce it. The Risky Business report continued to spread media ripples with in-depth summaries in The New Republic, GreenBiz, Grist and Climate Progress. Even as National Journal’s coverage announced that the climate war has reached Wall Street, a survey of 800 business executives showed that renewable energy enjoys broad support on Main Street.

Germany and Australia install rooftop solar for half the US cost

The cost of rooftop solar in the United States could drop substantially if photovoltaic installers drew on the playbooks of their foreign counterparts, according to a new analysis from Rocky Mountain Institute. Installing a PV system averaged just 4.3 hours per kilowatt in Germany and 6.1 hours in Australia, compared with 9.4 hours in the U.S.—part of the reason homeowners in those countries pay about half of what Americans do. Other factors include motorized installation aids in Germany and a flat installation fee in Australia, which helped contractors in both countries complete a residential installation in a single day.

Global warming is local, too

The hotter it gets, the more likely people are to move in search of better living conditions, according to a new study published by the National Academy of Sciences and summarized by Scientific American. Heat waves and droughts had a much stronger effect on Indonesians’ migrations than natural disasters such as floods, volcanoes, and earthquakes. These local manifestations of global warming are captured in “down-scaled” climate models that bring home the meaning of climate change—such as these maps of future summer heat in the United States.

The U.S. Conference of Mayors—representing more than 1,400 cities with populations over 30,000—called last week for national legislation to limit greenhouse gas emissions and adapt to impending climate shifts. Although their resolutions focused on actions they’d like the federal government to take, they could also look at what they can do under their own authority, like their peers in King County are doing with the help of Climate Solutions’ New Energy Cities program, aiming for a 50 percent reduction in carbon emissions by 2030.

Some homeowners hit tricky waters when they sell houses equipped with leased rooftop solar arrays, according to Bloomberg News. Sellers have had to buy out the rest of their leases or drop their asking price—in contrast to resident-owned solar, which added an average of $25,000 to home values in a DOE-sponsored study. Meanwhile, a major builder is offering battery storage at three solar-equipped California developments so that occupants can use renewable power at night, too. Energy storage can turn these homes into intelligent nodes in the coming smart grid that will be a critical driver in modernizing electricity supply.

Climate policy Down Under took a surprising turn last week when mining tycoon and senator-elect Clive Palmer took the stage with climate advocate Al Gore to announce that he wants to maintain some Australian climate progress. Liberal Prime Minister Tony Abbott needs Palmer’s support to cancel the carbon tax, because Palmer’s party holds the balance of power in the newly elected Senate. After a meeting with Gore, Palmer said he would agree to end the carbon tax, but insist on keeping the emissions trading system in place—though at a price of zero until Australia’s trading partners enact carbon limits.

Denver transit on the road to improvement

Denver is leading the West Coast as a model of urban transit, according to The Atlantic’s CityLab. Since congestion-frustrated voters approved $4.7 billion of new debt for light rail ten years ago, the city’s transportation district has aggressively rolled out integrated light rail, passenger trains, bus services, and bike share, connected to densely developed, affordable housing. Congestion remains a serious problem, however, and transportation planners have yet to turn the famously car-centric city back into the train town it once was. So far, just 6 percent of residents commute on transit—half the rate of similarly sprawling LA and Atlanta.