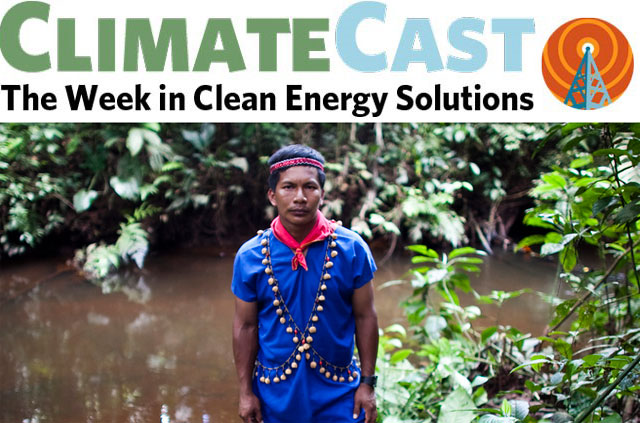 Regulators’ call to connect 1.3 gigawatts of power storage to the California grid by 2020 seemed like a high bar until the first round of proposals came in, totaling more than 2 gigawatts. That total doesn’t even count projects that would operate within a neighborhood, downstream of high-voltage transmission lines. Abundant storage has the potential to transcend renewable energy’s chief limitation—its intermittent availability. Grid-connected storage is playing a role in New York, too, where Consolidated Edison is looking to battery banks as one way to reduce peak loads and avoid the construction of a new $1 billion substation.

The federal government will hasten the day when newer, sturdier tanker cars are required for shipping crude oil, according to a proposal released a day before an oil train derailed in Seattle last Thursday. No oil was released in the derailment, which occurred when the train was going just 5 mph. Later that day, a report to the Puget Sound Regional Council detailed the volume of rail traffic that could be expected if a coal port is built near Bellingham and oil train traffic continues to increase. But coal exports may be less profitable than expected, now that prices have resumed their downward slide, now just half of their 2011 peak.

What climate change is doing to our mental health

Researchers in Australia have documented the mental health impact of drought, made more likely by global warming. Shifting weather patterns affected farmers, whose sense of mastery over their destiny was eroded along with their livelihood, and Aboriginal elders, who reported that the unfamiliar weather patterns left them with a general sense of unease. The researchers coined a word—solastalgia—to describe the feeling of missing the way your home used to be. In the Marshall Islands, threatened by rising seas, anthropologists found that most residents don’t blame industrial countries for climate change, but feel responsibility for their much smaller part in causing global warming, and see it as a reason to return to traditional ways of life.

Local peoples are best at keeping carbon in the forest

Community-controlled tropical forests emit far less carbon from logging, clearing, and burning than other comparable lands, according to a new report by the World Resources Institute and the Rights and Resources Initiative. The report, based on satellite imagery, showed that in the Brazilian Amazon, indigenous forestlands have shrunk by just 0.6% since 2000, versus 7% in areas outside local control. Similar results were found in Mexico, Guatemala, and Bolivia. The authors estimate that if land rights were transferred to indigenous forest peoples throughout Brazil’s part of the Amazon basin, 12 billion fewer tons of CO2 would be emitted by 2050.

Most of new generating capacity comes from renewables

Solar and wind power comprised more than half of the new generating capacity added to the U.S. grid in the first half of 2014, according to figures released by the Federal Energy Regulatory Commission. This development is consistent with a peer-reviewed study just published in Energy, laying out a road-map for California to get all its new generation from renewables by 2020, and to be entirely fueled by water, wind and sunlight by 2050. In Denmark, on-shore wind is already the cheapest source of new power, according to a study from the Danish Energy Agency—a finding that would survive a 10 percent increase in the cost of capital.

As the Carbon Emissions Reduction Taskforce prepares for its third meeting to design a carbon-pricing system for the Evergreen State, a flurry of articles explores different approaches. Stand-up economist Yoram Bauman pitched a Washington carbon tax modeled on the British Columbia system a few days before new public opinion findings suggested voters like using carbon taxes to fund a transition to renewable energy. The implications of linking to the California cap-and-trade system are explored here, and the most detailed analysis in this week’s crop appears in this three-part series on understanding and coping with the limits to what citizens are willing to pay for the privilege of emitting CO2.

Electric utilities should take a leading role in the shift to electric vehicles, according to speakers at the EV Roadmap 7 conference in Portland last week. Not only can they offer rebates and subscription plans to customers who install charging stations, as Austin Energy does, they can jumpstart demand for electric vehicles through their own fleet purchase programs. Electric vehicle sales grew 33 percent in the past year, and the diversity of available models is on the rise, including Tesla’s $35,000 Model III, which will be ready for delivery in 2017.

Harvard historian Naomi Oreskes has moved from the straight-on deconstruction of climate-denier movements in The Merchants of Doubt to a cli-fi vision of how historians might chronicle the next three centuries in a dystopic world that delayed climate action too long. Ironically, she says in this Guardian interview, if deniers get their way now, the U.S. would face much more vigorous government action when catastrophic climate change sets in. Meanwhile, Joe Romm sees hope in an increasing tendency to mock climate deniers in the work of The Onion and other humorists and by center-right pundits.