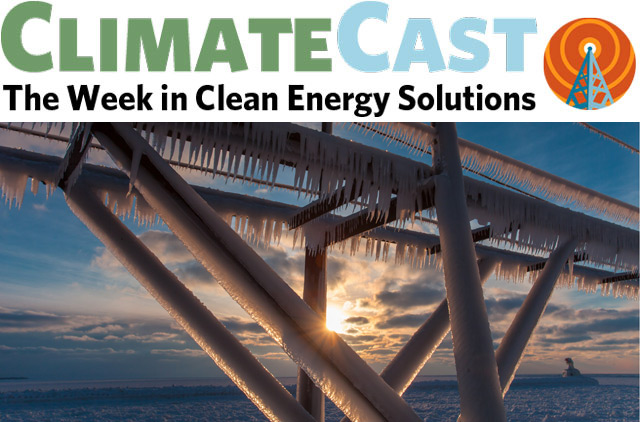 European Union negotiators agreed last week that the EU will cut its carbon emissions 40 percent below 1990 levels by 2030, a move that some hailed as climate leadership while others decried its disappointing details. The deal included concessions to the coal-intensive Polish economy, and left renewable energy and conservation goals non-binding to accommodate British concerns over infringement of national sovereignty. Two and a half hours east, in Bonn, diplomats couldn’t figure out how to raise $100 billion a year in climate aid for the developing world, kicking the problem down the road for higher-ranking officials to tackle at December’s Lima conference.

Cap-&-trade or tax...or maybe a little of each?

A new policy analysis from Sightline Institute released last week showed how a carbon tax and a cap-and-trade regime could be used in tandem in Washington and Oregon to ensure the system achieves its climate goals while also sending a predictable price signal to energy consumers. California’s clean energy rules came under fire last week for allowing utilities to shift emissions off their books simply by selling their stake in coal plants to out-of-state firms, with no net reduction in carbon dioxide emissions. But federal maps reprinted here show that cleaner sources of power have come on-line nationwide as coal-fired power plants have been retired.

Scientists assemble in Copenhagen this week to tussle over the capstone of the latest Intergovernmental Panel on Climate Change (IPCC) report, a synthesis of scientific and economic findings finalized over the last year. A draft warns of “serious, pervasive and irreversible” impacts, unless countries act to rein in carbon emissions. Wrangling includes a bid by the U.S. and the E.U. to emphasize that the projected cost of reducing emissions is tiny when considered as a fraction of anticipated economic growth, and a contrasting plea by Saudi Arabia to trumpet the cost of transitioning away from fossil fuels.

Arctic sea-ice melt since 2004 caused new wind patterns that forced frigid air southward and doubled the risk of severe winters in Europe and northern Asia, according to a new University of Tokyo study published in Nature Geoscience. The finding supports the view that warmer average global temperatures will cause more severe weather. In response to last winter’s frigid polar vortex, Americans burned more fossil fuels to stay warm, which caused US carbon dioxide emissions to increase 2.5 percent in 2013 over 2012, one of the warmest winters on record. U.S. homes emitted 16 percent more CO2 for space heating in 2013 than they did the previous year.

Everyone wants in on solar rooftops

With just two more years of the 30 percent federal tax credit to go, energy firms are pitching new ways to attract customers for rooftop solar electric systems, including discounts for employees of specific companies and proposals from utilities to install solar panels on their customers’ homes. It turns out, though, that the best predictor of whether a homeowner will install solar is the proximity of the nearest solar rooftop. As photovoltaics get cheaper, they are more apt to cut into utility profits than to raise rates, posing an existential threat to the business model that has supported electric companies for the last century.

Build it and they will come ... or maybe not

A new Washington State traffic forecast offers the first government recognition that the demand for driving is growing slower than it used to. Last year’s report anticipated that vehicle-miles traveled would increase by some 20 percent in the next two decades, but this year the state predicts that driving will remain flat and then decline. This correlates with the Millennial Generation’s lower tendency—or need—to drive thanks to their preference for living in city centers. If they only lived in the Norwegian town of Lillestrøm, they might have garnered the $15 “reverse toll” paid one day to self-propelled commuters to recognize the benefits of walking and biking.

China’s coal consumption dropped during the first three quarters of 2014, despite annual economic growth of over 7 percent and 4 percent growth in electric power consumption. The decline marks the first year-over-year decrease this century, according to government figures publicized last week by Greenpeace. It augurs well for China to meet its carbon cap set for launch in 2016, whose draft rules include a $49 per ton fine for companies that emit more than their state-allocated permits. On the less industrialized end of the spectrum, a Bangladeshi NGO has installed 1.5 million home solar electric systems, serving an estimated 8 million people.

Extreme weather disasters offer one angle in the emerging literary genre of cli-fi, as author Paolo Bacigalupi tells Salon. “I’m definitely writing my fears,” he says, describing the drought-stricken Southwest that is the backdrop for his upcoming novel The Water Knife, which features a war over the wet stuff between Phoenix and Las Vegas. Playwright Benjamin Kunkel offers a more psychological treatment of the climate issue in his play, “Buzz,” where the unheard buzzing of unseen flies stands in as an allegory for our thinking about climate, in performance at a Brooklyn loft through November 22.

On the Climate Solutions blog: More than 100 Washington businesses, including Microsoft, Virginia Mason, and REI, as well as the Seattle Metropolitan Chamber of Commerce, declared their strong support for climate action by signing the Washington Business Climate Declaration, Chris Bast reports. Jenna Garmon describes how Northwest farmers, entrepreneurs, and scientists are delivering climate benefits with biocarbon, which removes carbon dioxide from the atmosphere.