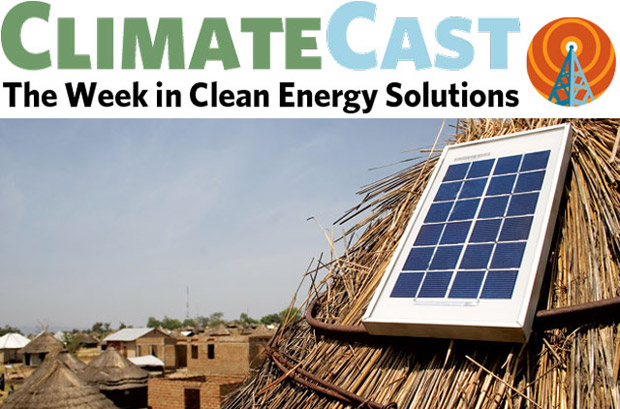 Mexico’s climate pollution will peak in 2026 and shrink in half by the middle of the century, according to goals announced last week. The pledge is the first by a developing country ahead of December’s Paris climate talks. Norway also announced its goal for a 40 percent cut in greenhouse emissions by 2030. Most nations will miss the UN’s March 31 deadline, including India, which offered to set a more ambitious goal if it receives foreign aid in developing clean energy. These public commitments—tallied here—rely on peer pressure to curb global warming in a way that one author compares to the codes of cooperation that bind Himalayan villagers.

California became the first state last year to derive 5 percent of its power from utility-scale solar, according to federal figures released last week. The increase in clean energy more than made up the shortfall from drought-impaired hydro generation, and has heightened the drive to add power-storage facilities to the state’s grid. Solar’s 6.2 GW growth in the U.S. in 2014, totaling a third of the nation’s new generating capacity, nonetheless faces challenges in the next few years from the scheduled end of most federal tax credits and proposals to restructure metering arrangements with grid-connected customers.

The UK cut its greenhouse emissions last year by more than 8 percent, thanks to increases in renewable power, a drop in coal use, and warmer weather reducing household heating needs. Renewable energy now plays such a large role on the European grid that electricity prices plunged last week in response to weather forecasts calling for abundant wind power. In developing countries, a new study in Nature Climate Change finds that the falling price of solar power increases access to electricity both on and off the grid; off-grid users benefit from lower capital costs because mobile phones make micropayment systems possible.

Notwithstanding a promising set of projections for the impact of carbon revenue on the Washington state economy and job market, at the cost of a barely perceptible bump in families’ spending on fossil fuels, legislators in Olympia opted not to include Gov. Jay Inslee’s carbon cap (and its billion-plus per year in revenue) in their budget proposal for the coming biennium, though the House leadership said they will keep working to advance the policy this session. Meanwhile, Quebec’s auction for carbon allowances, held jointly with California, is projected to raise $3 billion over five years for pollution-cutting programs and has prompted innovations such as a fleet of electric school buses.

The U.S. coal sector is in a tailspin, with two dozen bankruptcies and hundreds of mine closures in the last few years thanks to competition from gas and renewables as well as tighter environmental regulations, according to a new report by the Carbon Tracker Initiative. The industry’s international fortunes are failing as well, with exports through Prince Rupert, BC, dock down by about half. In Asia, Beijing shuttered the last coal plant in the Chinese capital on air quality grounds, and Japan came under fire for using “climate finance” funding to support the construction of coal-fired power plants in India and Bangladesh.

New Jersey Gov. Chris Christie has bailed on offshore wind energy as he explores a possible run for president, while candidate Sen. Ted Cruz (R-Texas) compared himself to Galileo for his willingness to stand up to climate change orthodoxy—a curious twist, given that scientific evidence points both to anthropogenic climate change and the rotation of the Earth about the Sun. It’s part of the idiosyncratic US political climate over climate, in which college-educated Republicans are less likely to acknowledge the human role in global warming, and the nation lags behind the rest of the industrialized world in recognizing the threat it poses.

Midwest power company Exelon is asking Illinois regulators to require electricity suppliers to buy credits from carbon-free power generators, in a move that would allow its fleet of nuclear plants to earn a premium for their fossil-free electricity alongside some solar and wind facilities. Exelon’s earnings have been squeezed as cheap natural gas has driven power prices down, while its nuclear costs remain fixed. Exelon’s large nukes wouldn’t benefit from a provision noticed last week in President Obama’s executive order reducing the federal government’s carbon footprint: “small modular nuclear reactor technologies” would count toward the minimum quota of low-carbon energy that the federal government must procure over the coming decade.

Florida’s head-in-the-sand climate change denialism is vexing Miami officials, who want financial help from state lawmakers to deal with rising coastal flooding. The city floated a bond to raise close to half a billion dollars to pay for dozens of pumps to flush high tides and rainwater into Biscayne Bay. Current studies analyzing global ice loss indicate that Miami should plan for a sea level rise of six to 10 feet by the end of the century, an elevation that would jeopardize half a trillion-dollars’ worth of real estate in Florida, and another $900 billion worth elsewhere in the US, risking a financial crisis sparked by real estate losses.