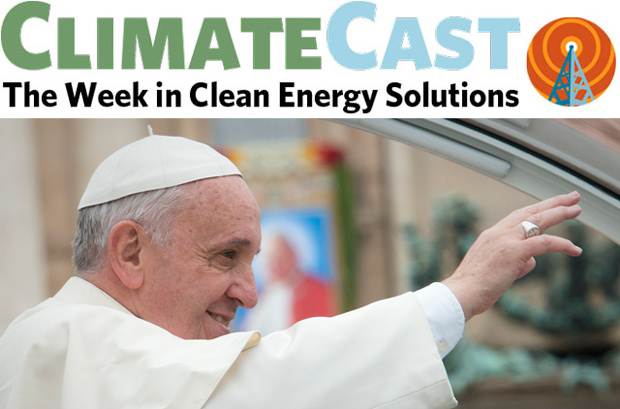 Pope speaks out on climate, but effect still unclear

With the publication of his long-awaited encyclical, Pope Francis last week called for sweeping action on climate change, arguing that humanity has an obligation to care for creation and to minimize the impacts of global warming, which will fall hardest on the poor. The exclusion of climate deniers from his deliberations showed those forces’ weakness at the Vatican, but the leak of a draft three days before its official release hinted at internal opposition either to the pontiff or his position. In the wake of his pronouncement, speculation swirled about the sway his words might have on U.S. Catholics and their clergy, the Republican presidential race, and heavily Catholic Latin America.

Big-rig trucks will need to improve their fuel economy by 25 to 30 percent over current models, according to draft federal rules released last week that will take full effect by 2027. The improved technology will add $10,000 to $12,000 to the cost of each truck, but fuel savings will outweigh those costs within two years. The standards fall short of the 40 percent increase that is feasible and cost-effective, according to Union of Concerned Scientists research. For cars and light trucks, meeting the 2025 benchmark of 54.5 mpg will cost about half as much as previously forecast, said a new study commissioned by the federal highway agency.

The White House announced $4 billion in private-sector investment commitments to climate change solutions—twice the goal set four months ago—along with a new Clean Energy Investment Center, a single access point for clean energy resources. Attending the announcement were members of a syndicate of 100 family funds representing more than $80 billion, which plans to invest $2 billion in clean technology by 2020. This activity may signal a change in attitudes toward investing in clean energy. Another proof point: A survey of 100 large US investment companies by financial services firm Wider Capital found 60 percent plan to invest in solar power in the next five years.

How low (carbon) can you go?

The spread of renewable energy onto the electric grid took another step forward last week as Vermont upped its standard for clean power: 55 percent renewable by 2017 and 75 percent by 2032. The bill also funds wider “energy transformation,” including utility-bill financing of efficiency upgrades. Long-shot Democratic presidential hopeful Martin O’Malley called for the U.S. to go even farther—to 100 percent clean energy—by 2050. While high levels of intermittent clean energy on the grid can pose a challenge for utilities, a new study shows that Texas and Colorado were able to accommodate nearly 40 percent wind power without disruption.

Renewable energy accounted for 59 percent of 2014’s new electrical generating capacity worldwide, according to the Renewables 2015 Global Status Report. Fueling the increase was $270 billion in clean energy investment, a 17 percent increase over 2013, and the spread of renewable energy policies to 164 countries around the world. Those policies, especially in China, helped hold fossil fuel emissions steady last year even as the world economy grew 3 percent. India’s cabinet last week officially quintupled its 2022 solar power goal to 100 GW, formalizing a target floated in recent months, and supporting the Modi government’s goal of bringing electricity to the 400 million Indians without it.

Low crude prices have led multinationals to cancel two dozen deep-water-oil projects and gas facilities worth $200 billion, according to a report released last week by consultants Ernst & Young. Cheap oil—and dwindling production from the North Slope, off 75 percent from its 1990 peak—is putting the squeeze on Alaska’s state budget, which has relied for decades on petroleum revenues. Coal’s hope of being climate-compatible through carbon sequestration suffered two setbacks, with Royal Dutch Shell acknowledging that it would be expensive to insure against the risk that the stored CO2 would escape, and Illinois’s Commerce Commission finding that the technology would be “prohibitively expensive” (EnergyWire, sub).

On the battlefield of public opinion

Two non-profits funneled $125 million in private donations to right-wing groups spreading climate denial, writes The Guardian. Deniers are targeting Millennials as their next demographic, while new polling suggests Americans are growing more concerned about climate change. Elsewhere in the battle for hearts and minds, The Weather Channel rolled out a series of 25 celebrity climate soliloquys, and The Guardian launched a series, “Too Hot to Handle,” aimed at tackling climate with a sense of humor. As if on cue, journalist Peter Dykstra offers climate deniers some tongue-in-cheek suggestions for speakers at their next conference. Top possibilities: Monty Python’s Black Knight and the shark-denying mayor from Jaws.