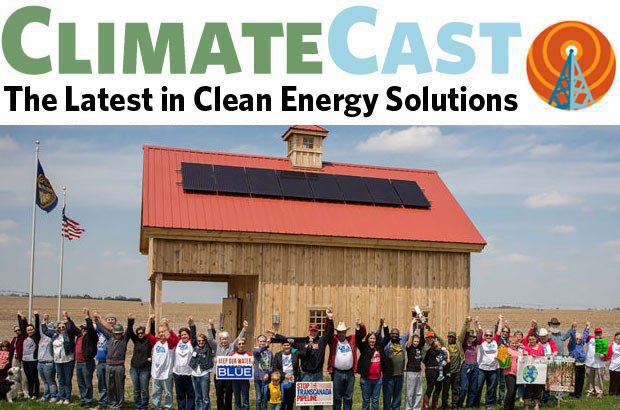 Inhabitat
Tags
Climate Cast
The resistance is as strong as it is creative
Devon Downeysmith
July 25, 2017

Everyone is signing on to the clean energy revolution, even big oil

Royal Dutch Shell may be the second largest oil company in the world, but they’re aware their product has a limited supply—or that the market won’t last forever; the company recently announced plans to invest $1 billion in renewable energy. Saudi Arabia, the world’s largest exporter of crude oil, has its own $50 billion clean energy program underway to boost power generation and cut oil consumption. And why wouldn’t these entities want to invest in clean energy? Earlier this month a report showed that building solar arrays is now more cost effective than building fossil fuel gas plants, American wind turbines have finally been able to exceed coal’s maximum energy output, and coal plants—like these two in Idaho—continue to close. The U.S. Department of Energy has awarded more than $46 million in grants to improve solar technologies. The Seattle-Tacoma airport is examining how to make sustainable aviation fuel affordably available. Hawaii is moving forward to construct a new power plant that will run partly on biofuels. Apple received approval for a new wind energy project in Oregon to power its data center utilizing some of the largest wind turbines ever deployed in the Pacific Northwest.

The clean car movement is accelerating

Falling battery costs, longer vehicle range, government rebates, and increasingly stringent emissions guidelines all add up to the clean car movement accelerating rapidly. Rideshare giant Lyft says it plans to provide over one billion rides per year using autonomous electric vehicles within just 8 years. By 2035, electric cars may account for all new vehicle sales in Europe. India’s Tata Motors has just unveiled its first biogas bus, a big deal in a country where public transport is the primary mode of getting around. In the US, some electric utilities have also started offering rebates to customers who purchase plug-in vehicles in an attempt to increase sales. Smart business move!

West Coast to federal government: if you won’t lead on climate, we will

States are working to propel climate action forward, and there’s big buzz around California’s bipartisan vote to extend its pioneering cap-and-trade program. Oregon’s own Governor Brown has voiced a strong desire to see the Clean Energy Jobs bill pass next year—a cap-and-invest proposal to price and cap pollution and reinvest proceeds in the state’s clean energy economy. Washington State’s Swinomish Indian Tribal Community has joined the growing list of Native Nations committed to upholding the Paris Climate Agreement.  An Oregonian op-ed applauded lawmakers for preserving Oregon’s low-carbon fuels standard this past session, yet also urged them to do more next session for Oregon’s environment. For more details, check out our very own David Van’t Hof’s assessment of Oregon’s recent legislative session.

The climate denial narrative encounters a reality of resistance

Despite efforts to bring back coal, weaken environmental regulations, and “drill baby drill,” Trump’s attempts to remove limits on how much methane oil and gas companies can emit are hitting roadblocks. From Nebraska ranchers building solar panels in the path of the Keystone XL pipeline, to Pennsylvania nuns erecting an outdoor chapel where a pipeline would run through their property, the resistance is strong, and creative! Following in the footsteps of lawsuits against big tobacco asserting that companies did not warn customers about the danger of their products, two California coastal counties are now suing 37 oil, gas and coal companies over sea level rise. A federal scientist is sounding the alarm, alleging he was reassigned to an obscure job in accounting after advocating for Alaskan Native communities impacted by climate change. He refuses to stay silent, filing an official whistleblower report and authoring an op-ed in the Washington Post detailing what happened.

It’s hard to tell where climate impacts end and existential threats begin, especially when climate change is already a known threat multiplier, exacerbating stressful conditions in vulnerable places like Syria, Bangladesh, Guatemala, Chile and South Sudan. New research has found that we may seriously be underestimating the risk of crop disasters from climate impacts. Strange things are happening too, like seabirds who rarely spend any time on land washing up on east coast shores, dead from starvation, leaving us to wonder what their fate forebodes for us. Our cultural history is certainly threatened; stone age ruins at a UNESCO World Heritage Site in Scotland are having difficulty weathering rising seas and increasing storms. Some scientists even warn that a sixth extinction may be underway. Amid the warnings one thing is clear: the time to act on climate is now.

From fighting wildfires to taking flight and growing food, it’s too hot out there

2017 is already, so far, the second hottest year on record, and the heat is causing some major problems. A study of 19 airports across the world shows that rising temperatures will make it harder for airplanes to become airborne. An iceberg the size of Delaware broke off of the Larsen C Ice Shelf, which may exacerbate warming. In fact, scientists report that the Antarctic ice shell is continuing to crack. A new study shows that climate change is already negatively impacting crop yields of staple grains like rice, wheat and corn, while other research shows that climate change is making wildfires so large, intense and unpredictable to fight that we must shift our approach.

Meanwhile, in de land of denial

Despite a wealth of evidence, a world of warming, and a scientific consensus on climate change, climate denial is still alive and well—particularly in Washington D.C. these days. The White House has outlined how various agencies plan to repeal numerous Obama-era rules on air and water pollution, fossil fuel extraction and more. The Trump administration has given the green light on an Arctic drilling proposal, while also hinting they may be open to oil exploration in the Arctic National Wildlife Refuge. The EPA is offering buyouts to over 1,000 key positions, confirming fears that Scott Pruitt indeed plans to drastically weaken the agency (see here for an EPA-staffer authored resistance plan!). President Trump’s new communications director is toeing the party line on climate denial, despite past tweets confirming he once found such denial “disheartening.”  However climate change as a national security threat continues to be an area of concern for the military—even for Trump’s Navy secretary nominee.

In Brief: Fear-based climate messaging: a help or hindrance to the movement?

Recently, an article in New York Magazine ruminated on the future of our climate changed earth should we fail to act on climate. Spoiler alert: it wasn’t pretty. Predicting famine, economic collapse and a barely inhabitable world, the controversial piece immediately went viral—as did its detractors. Articles in Mashable, Grist, and New Republic criticized the validity of the original article’s claims, as well as the effectiveness of fear-based messaging. Vox’s David Roberts noted that it’s “weird for journalists and analysts to worry about overly alarming people regarding the biggest, scariest problem humanity has ever faced.”

So we ask you: what moves you to act? Do alarming stories harness your resolve, or simply deflate you? Do optimistic, positive messages inspire, or seem out of place with the current climate reality? We’d love to know your thoughts.