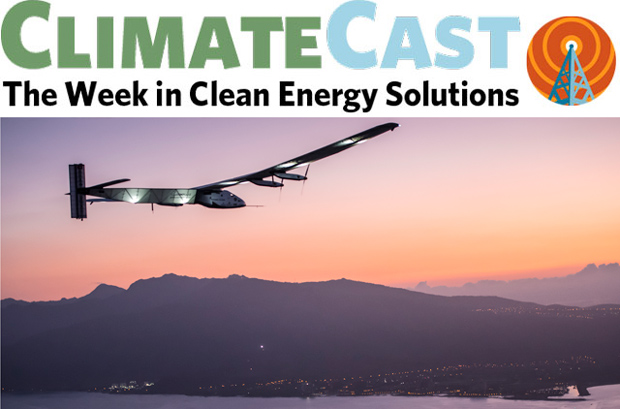 Western Europe baked in extraordinary heat last week, as 103˚F Paris endured its second-hottest day on record and France activated emergency response plans devised after 2003’s deadly heat wave. In the US Pacific Northwest, 29 homes were lost in Wenatchee, WA last week to an early-season wildfire aggravated by unusually hot and dry conditions, a 1,200-acre wildfire is burning in the Olympic rainforest, and Cascadian researchers warned that ocean life is at risk from rising temperatures and acidification. The heat continues a pattern of global over-heating this year; scientists are using statistical analysis to calculate how much more likely these heat waves are in a warmed world.

Solar developers offered 1,200 MW to Austin, TX’s municipal utility at less than 4 cents per kilowatt-hour, according to bids opened last month. Even accounting for the federal tax credit, these bids mark a new low in the price of solar electricity. Official solar statistics tally projects like these but ignore rooftop arrays, according to a new report, which would add another 50 percent to solar generation totals. In Wyoming, an oil-and-real-estate mogul is developing a multi-thousand-megawatt wind farm; “a wind turbine is just an oil well turned upside down,” says his manager. Renewables now account for 22 percent of OECD electricity, boosted by recent growth in wind and solar.

United Airlines boosted its bet on biofuels last week, announcing a $30 million investment in Fulcrum Energy to turn garbage into jet fuel. The investment will underwrite as many as five fuel plants, to be sited near United hubs, with a capacity of up to 180 million gallons per year to be sold at a price competitive with petro-jet. Garbage and animal waste are the raw materials of another biofuel, renewable natural gas, which the California Air Resources Board is considering as a way for the state’s transit agencies to meet climate mandates without having to electrify their bus fleets.

A remote southern California town has gained more reliable electric service since the utility built a micro-grid, mostly fed by long-distance transmission lines, but able to run on nearby solar arrays and batteries when the lines go down. Utilities in France and northern California are experimenting with grid-connected storage, too, and a new study shows that solar saves Pacific Gas & Electric significant investment in new capacity on a tenth of its circuits.  SolarCity rolled out its solar-plus-storage option last week—a technology whose prospects are casting a pall on New South Wales’ attempt to auction the rights to its electric grid, says The Wall Street Journal.

China formalized its climate pledge last week, promising that by 2030 it will reduce the carbon intensity of its economy 60 to 65 percent and begin to decrease overall carbon emissions. At a summit in Washington, DC, US and Brazilian leaders vowed to obtain at least 20 percent of their countries’ electricity from non-hydro renewables, which will require a tripling of the US share by 2030. India refused to set a date when its overall emissions will peak, but Korea raised its commitment to a 37 percent cut in climate pollution by 2030, 11 percent to be satisfied by the purchase of carbon credits.

A German firm last week debuted a plant that uses wind energy to produce hydrogen for fuel-cell vehicles, opening a new front in efforts toward renewable transportation. Until now, hydrogen for fuel cells has largely been made from natural gas. The move coincides with the release of Toyota’s Mirai FCV and the inauguration of a hydrogen fueling network sponsored by Daimler, Shell, and others. In the battery-powered division, London will test all-electric double-decker buses this fall. Breaking records for the longest non-stop flight without refueling, the purely solar-powered plane Solar Impulse II flew 118 hours last week from Japan to Hawaii, on the eighth leg of its global circumnavigation.

Germany’s carbon emissions fell 4.3 percent in 2014, an indication that the country is maintaining its delicate balancing act—aiming to be 40 percent less carbon-polluting by 2020; phasing out nuclear energy by 2022; achieving 35 percent renewable energy by 2030, while trying not to replace its lowest carbon energy source with coal. The country will phase out 2.7 gigawatts of brown coal-fired power, going on reserve in 2017 for four years before being shuttered completely. South Korea’s GHG emissions also fell 0.6 percent, while its economy grew 3.3 percent in 2014.