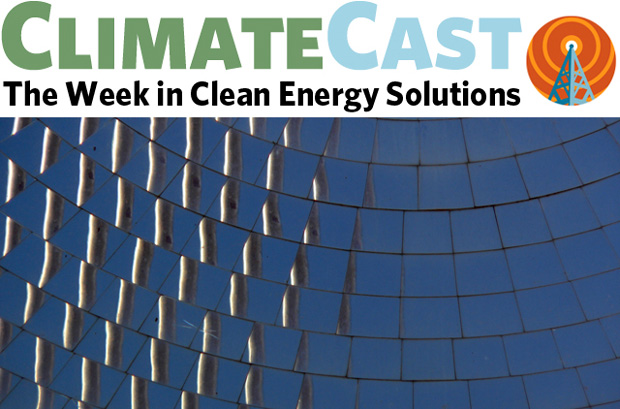 We’re riding on the Marrakech Express

The annual UN climate conference opened Monday in Marrakech, Morocco to hammer out implementation details for last year’s Paris agreement, which took effect last week has now been ratified by more than 100 countries. With the outcome of the US presidential election looming in the background, delegates prepared to tackle questions left hanging in the climate accord, such as how countries will report on progress toward achieving their voluntary pledges, and how richer nations will help poorer ones transition to clean energy and adapt to a warming climate. Some less-affluent countries have come to regret the ambitious commitments they made last year and now wonder whether they will be able to live up to them. Meanwhile, the presence of fossil fuel companies at the talks has rankled other observers.

The carbon intensity of the global economy fell by 2.8 percent last year, according to PricewaterhouseCoopers, as a result of a drop in coal consumption. The decline was more than twice as fast as the average rate since 2000, but less than half as rapid as it must be for the world to stay within the 2˚C warming limit. Analysis of UK power generation suggests that coal-fired generation will drop by an astounding 66 percent from 2015 to 2016, driven largely by an increase in the carbon price to £18 ($22.30) per ton of CO2. In the US Northeast, the regional carbon cap for electric power has cut climate pollution in half since 2005. In other decarbonization pledges, China announced it will cut its carbon intensity 18 percent by 2020, compared with 2015 levels; in Australia, the state of New South Wales vowed to shutter its coal plants by 2035 and achieve a net-zero-carbon economy by 2050.

Climate issues on the table in down-ballot races

Apart from the presidential race, climate issues figure in several down-ballot races, including the Arizona Corporation Commission. Races for three commission seats have attracted $3 million in campaign spending by the state’s electric utilities on one hand and SolarCity on the other, with net metering at stake as well as a possible $24 monthly connection fee for solar customers. Nevada voters can give customers the right to choose their electricity supplier if they approve Question 3, the “Energy Choice Initiative” endorsed by retiring Sen. Harry Reid. In Florida, utilities added another $3.5 million to their war chest for the deceptive, anti-net-metering Amendment 1, which was polling well below the 60 percent threshold required to pass. Senate and gubernatorial races are consequential for climate, too; this year’s crop is summarized here.

The rising power of the sun

California solar power has grown faster than predicted, with a new study on the so-called “duck curve” showing that the deep midday dips in demand for other resources are running about two years ahead of what was anticipated just three years ago. These troughs lead to steep “ramps” in the afternoon and evening, when utilities must boost generation by as much as 10,000 MW in three hours as the sun fades and load increases. But energy-storage technologies are coming on line that will ease this challenge: Hawaii has seen a surge in applications for the “self-supply” solar option, in which customers use PV panels and batteries to minimize exchange of power with their utility. Tesla released a new version of its Powerwall battery that stores twice as much energy as its predecessor and comes with a built-in inverter, reducing the cost of interconnection. On a larger scale, massive battery storage has enabled one UK solar farmer to sell his power to the grid when it is most valuable, increasing his annual income by as much as $250,000 per year.

Oil majors to invest in CCS, not renewables

After press leaks foreshadowed an oil majors’ investment fund aimed at capitalizing renewable energy projects, the actual announcement last week proved underwhelming. The 10-firm Oil and Gas Climate Initiative will invest $1 billion over a decade in projects to reduce leakage of methane (a greenhouse gas) and to promote carbon capture and storage when natural gas is burned, while also sinking money into raising fuel economy. In an earnings call last week, Royal Dutch Shell’s CFO predicted that world oil demand will peak in five to 15 years — a noteworthy prediction given Shell’s long history of scenario planning that takes account of myriad geopolitical, technical, and economic factors.

The federal government will establish EV corridors along nearly 25,000 miles of highway, the White House announced last week, where drivers can eventually be sure of finding a charging station at least every 50 miles. A sparser network will offer propane, natural gas, and hydrogen fueling as well. In California, the state EV tax credit is changing to favor low-income car-buyers, whose rebate will be raised by $500 in the hopes of making EVs more broadly available, while high-income buyers will become ineligible for the credit. Engineers at Toyota—which had previously staked its advanced car line on hybrids and hydrogen—said they’ve now developed lithium-ion batteries that meet company standards for plug-in cars. And Finland is testing a self-driving 12-passenger electric bus to provide last-mile service in Helsinki.

Coal in transition, on trial, and in bankruptcy

After Midwestern mega-utility AEP sold a 2.7-GW coal plant and three natural gas power plants in September, it will plow nearly half the $2.17 billion proceeds into two new renewable power ventures for utility-scale and behind-the-meter projects. The Australian Council of Trade Unions is backing a plan to end the country’s use of coal power and create an Energy Transition Authority to support workers and communities through the switch. In Seattle, a trial began Monday to determine whether BNSF is liable for coal dust pollution in the Northwest’s waterways. And despite bankruptcy, four US coal companies have donated nearly $1 million to state and federal campaigns this year.