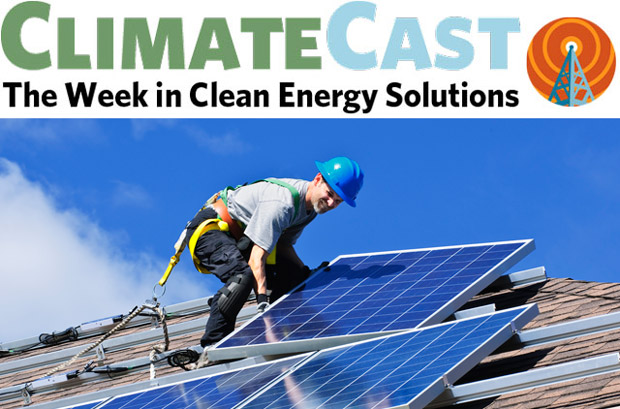 BP, Shell, and four other top oil companies this week called for the Paris climate summit to result in “widespread carbon pricing” as a way to reduce global warming. The CEOs’ letter to the Financial Times also makes a self-serving plea for the increased use of natural gas, another one of their firms’ products. This statement—which ExxonMobil and Chevron pointedly did not join—comes at the beginning of a 10-day meeting in Bonn aimed at refining the proposals to be brought to Paris in December. Ahead of the Bonn meeting, a business coalition managing $12 trillion in assets also called last week for bold climate action.

The EPA last week updated the minimum quota of biofuel that must be blended into the US supply of motor fuel, disappointing Midwestern farm interests by slowing the scheduled ramp-up in ethanol requirements. A decade ago, Congress set a 22-billion-gallon annual mandate for renewable fuels by 2016, which the new EPA draft cuts to 17.4 billion, just 6 percent above 2014 levels. Set-asides for biodiesel, cellulosic ethanol, and advanced fuels (not made from edible feedstocks) would grow faster. Following EPA’s announcement, the value of tradable ethanol credits plunged from 59 cents a gallon to 45, while the biodiesel premium climbed 10 cents a gallon, to nearly a dollar.

In the last five years, market forces, the cost of environmental retrofits, and dogged political opposition have shuttered more than a third of US coal plants, according to an in-depth report in Politico. Nonetheless, Obama’s Clean Power plan may contribute less than expected to coal’s demise, because other forces arrayed against coal are strong, and the EPA rules are likely to be flexible. Coal’s hope for the future—carbon capture and sequestration—came in for criticism last week in a new Greenpeace report highlighting that technology’s costs and pitfalls. In China, reports indicate that coal consumption may have peaked, although those statistics may not be completely reliable.

The Tsleil-Waututh First Nation last week rejected a proposal by TransCanada to expand a pipeline that would deliver petroleum from Alberta’s tar sands to a tanker terminal in Burrard Inlet, near Vancouver in the tribe’s traditional territory. The tribe cited studies predicting a high likelihood of a spill during the proposed terminal’s operating lifetime that would inflict grave damage on the marine ecosystem and expose the city to dangerous airborne chemicals. The Tsleil-Waututh’s action is the latest in a wave of indigenous opposition to fossil fuel projects in Cascadia, including a coal terminal near Bellingham, an oil terminal in Grays Harbor, and liquefied natural gas near Prince Rupert, BC.

The electric grid on Kodiak Island is now 99.7 percent clean, showing what it takes to blend intermittent renewables into the power supply. The island relied on diesel for 20 percent of its electricity until it added three large wind turbines to its portfolio. To keep the grid stable when wind suddenly dies down, the utility added 3 MW of battery storage to pick up the slack while hydro ramps up. A flywheel system will provide a boost when the harbor switches on its 2-MW crane. On-grid storage is taking off elsewhere, too. Duke Energy added 4 MW; Pacific Gas and Electric asked for 74 MW and was swamped with offers for 5,000.

Three major Florida utilities have embraced solar power, in a turnabout they say is prompted by falling costs and improved storage technologies—but critics suggest comes in reaction to a ballot initiative that would allow solar developers to sell electricity directly to consumers. The new-found Floridian enthusiasm for solar power even extends to Disney, which last week agreed to host a 5-megawatt solar plant whose 48,000 panels will be arranged in the shape of Mickey Mouse’s head. Swift shifts in economics and attitudes have led planners to underestimate how quickly renewables will be added to the grid, leading to over-cautious projections that are rapidly overtaken by reality.

Researchers are using mammoth “truck treadmills” and engineering wizardry to meet new fuel economy standards for trucks, which the EPA will announce this week. The rules are expected to raise the efficiency of big rigs by 40 percent—to 9 mpg—by the time they’re fully implemented in 2027. In California, a chunk of the state’s carbon auction revenue is providing multi-thousand-dollar incentives for residents of polluted air basins to replace old cars with hybrids or EVs; low-income participants qualify for higher rebates. Carbon funds are also funding a $15 million program to equip less affluent residents with rooftop solar, spreading the technology across income lines.