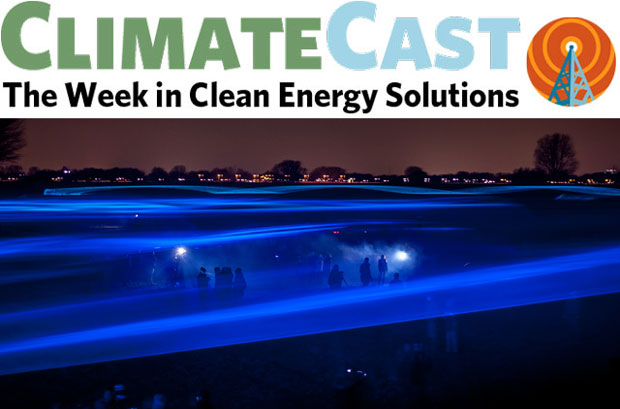 Florida Power & Light—owned by wind and solar giant NextEra—is pitching regulators on a half-billion-dollar deal to buy and close a 250-MW coal plant, so it can escape a power contract that is no longer competitive with other sources. The price of clean energy has fallen so far that green power plans for individuals are among the cheapest available in Texas, and counties that buy their own cleaner electricity under California’s community choice law are paying less than the state’s privately owned utilities. But other utilities, from Japan to Wisconsin and New Mexico, are resisting customer-owned generation—a battle that was just resolved in consumers’ favor in New York.

After a combative floor debate, the Oregon House of Representatives last Wednesday sent a bill to the governor that would extend the state’s 2009 low carbon fuel standard, which was due to expire just as it finally stood on the brink of implementation. The rule will require fuel dealers to cut the carbon content of their fuels by 10 percent by 2025. Two days after the vote, the Western States Petroleum Association, a consortium of oil companies, sued to block the standard, claiming that the regulations drafted earlier this year by the state’s Department of Environmental Quality exceed the authority the Legislature granted in 2009.

Bracing for too wet or too dry as climate changes

The long-predicted El Niño weather pattern has finally materialized, federal climatologists announced last week, though its weakness and lateness will likely mean little relief this winter for parched California. Precipitation has been ample in much of the Pacific Northwest, but the meager snowpack—an anticipated impact of global warming—bodes ill for summertime stream flows. Globally, however, climate change will triple the population affected by flooding, says a World Resources Institute study, in a phenomenon brought home by a haunting art installation in the Netherlands. In Manhattan, a team of architects is designing a flood buffer called the Dryline to fortify the city’s shoreline against a repeat of Hurricane Sandy.

Crews are cleaning up after two oil train derailments last week, both of which involved the purportedly safer redesigned CPC 1232 tanker cars. At least two railcars caught fire in northern Illinois, while more than 30 Canadian National cars jumped the tracks in Ontario, leading the railroad to lay 1500 feet of new track to bypass the burning train and reopen rail traffic between Toronto and Winnipeg. Ironically, the accidents come as oil stockpiles surge in the U.S. and around the globe and as German scientists announce the development of a “bio-battery” that converts a smorgasbord of organic wastes to engine oil, purified gas, electricity, heat and biochar.

Ghana announced a levy of 2 cents per liter of gasoline and kilowatt-hour of electricity to fund renewable energy projects in the West African country, including 200,000 rooftop solar installations that will amount to nearly 10 percent of the nation’s generating capacity. In India, an analysis by Deutsche Bank endorsed the feasibility of the government’s goal of deploying 100 GW of solar power—one-fourth of the country’s capacity—by 2022. The cost of solar power on the subcontinent is approaching the price of domestic coal and already beats imported coal, an advantage that will grow with the imposition of a newly announced $3.20-per-ton tariff to promote clean energy.

The Guardian kicked off a wide-ranging series on climate, keynoted by the departing editor’s realization that during his two decades at the helm, the paper had failed to convey the gravity of the situation. This week, author Bill McKibben floated the meme of a “fossil freeze,” reminiscent of the 1980s anti-nuclear campaign, and a former Shell chairman rebuffed Jonathon Porritt’s claim that it’s immoral to work for the fossil fuel industry. In New York, a judge rejected a “defense of necessity” by 10 Flood Wall Street demonstrators, but acquitted them because the First Amendment protected their right to bring their protest to the halls of finance.

The climate denial industry’s deceptive techniques came under scrutiny last week in a deconstruction of its leading strategist and in the new documentary, Merchants of Doubt, which won praise for its exposé of industry tactics and a critique of some of the film’s tropes. State-sanctioned climate spin came to light in Florida, where agency scientists say Gov. Rick Scott’s administration would not allow them to use the term “climate change,” mirroring similar restrictions reported in North Carolina and under Pennsylvania’s previous governor. In China, Communist Party officials pulled an air-pollution documentary from video streaming sites a week after its release, and scrubbed newspaper accounts of complimentary mentions of the film.

The ultralight Solar Impulse 2 completed the first leg of its planned round-the-world journey Monday, flying from Abu Dhabi to Oman on solar power alone. The plane is powered by solar cells that cover its fuselage and wings, whose span is wider than a Boeing 747’s. For transoceanic legs of its global circumnavigation, pilots will climb during the day, and glide down to 5,000 feet at night. For more common flying machines, the US EPA is nearing a proposal to cut carbon emissions from aviation; a Canadian group is proposing that BC Ferries use battery-powered vessels on its shorter crossings to reduce its petroleum consumption.

On the Climate Solutions blog: Kristen Sheeran explains why the Oregon House of Representative’s vote to lift the sunset on Oregon’s Clean Fuels Program is great news for the climate and the clean energy economy; Joelle Robinson calls for action to protest the Port of Seattle’s decision to sign a lease that permits Shell Oil to base its Arctic drilling operations at the port; Oregon Wild’s Communications Coordinator Arran Robertson discusses the critical need to preserve Oregon’s forests for their carbon-storing and habitat-protecting values.