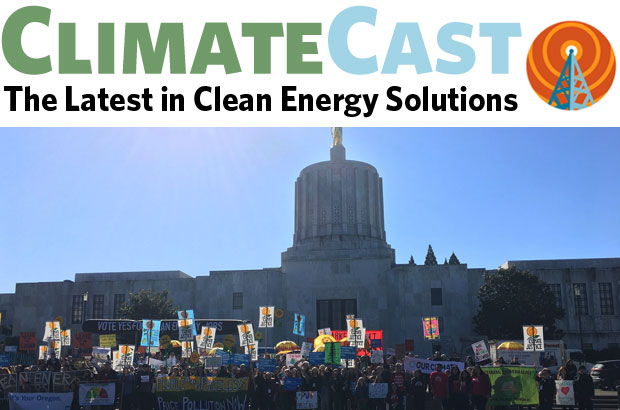 Accounting for the true cost of climate pollution

Carbon pricing programs are growing in popularity throughout the world, and Oregon has the chance to make history this year by enacting its very own program. The Clean Energy Jobs bill now under consideration by the Oregon legislature would place a limit and price on carbon emitted by top polluters in the state. If the bill becomes law, Oregon would become the second US state (after California) to place an economy-wide cap on climate pollution. New Jersey is also making headlines for carbon pricing plans; the state's newly elected governor has signed an executive order for the state to rejoin the Regional Greenhouse Gas Initiative, a multi-state program that places a limit and price on pollution from the utility sector. Carbon pricing continues to reveal itself as an effective, efficient means to lower emissions; new data shows that UK’s carbon price has greatly reduced local coal consumption, and may result in decreasing fracked gas use too.

Geothermal energy, clean energy created by using the earth's natural heat to create electricity, is ramping up. One company in California alone has plans to develop 1,000 megawatts of geothermal electricity over the next decade—enough to power 800,000 homes. Tesla will install residential battery storage systems and solar power in 50,000 Australian homes, creating a massive “virtual power plant” of energy stored and discharged in a decentralized way. Germany and the UK now account for 56% of the European Union’s recent renewable growth. Closer to home, a Lake Tahoe ski resort announced plans to source all electricity from renewables, making it the first US ski operator to power operations without fossil fuels. Many utilities are facing in the right direction as well. The CEO of NextEra, a giant energy company with subsidiaries that include Florida Power & Light (America’s third-largest utility, with 4.8 million customers), predicted on a recent shareholder call that it will soon be cheaper to build new renewable plants than to continue running existing coal plants.

A rash of recent research underscores how climate change is right now having dramatic effects on our health, our security and even our cultures. A new report on climate change and sports finds that only six of the past 19 Winter Olympics host locations may remain cold enough to hold similar winter sporting events in the future. Speaking of snow—California’s snowpack is at 27 percent of normal, due to higher-than-normal temperatures and lack of rain. A New York Times analysis finds that 2,500 chemical sites are located in flood-prone areas in the United States. As floods increase due to climate change, the risk of toxic chemical spills in these areas will also increase. Over half of India’s total agricultural land is unirrigated and is rain fed; climate change is projected to decrease crop yields in unirrigated areas by as much as 25 percent. And four months after Hurricane Maria, 450,000 customers remain in the dark. Those who do have electricity suffer from frequent blackouts. Researchers from Boston University and Harvard analyzed health data from over 30,000 women and found that menstrual cycle irregularity correlates with increasing rates of air pollution, another unanticipated way that climate pollution harms human health.

A new study confirms that carbon pollution has ended the era of the stable climate conditions that enabled the development of modern civilization  High levels of carbon pollution have caused global temperatures to rise above the slow-changing, relatively stable conditions that existed “when humans were figuring out where the climate — and rivers and sea levels — were most suited for living and farming.” Climate change is also weakening the jet stream, leading to more persistent weather extremes like heat waves, drought, cold snaps and flooding. British scientists have predicted that global temperature rise may exceed 1.5C, a threshold discussed during talks leading to the 2015 Paris Climate Agreement. During a two-week period last month, temperatures in Siberia rose 126 degrees, rocketing from -88 degrees to 38.4 degrees.

A new study shows that northern permafrost soils contain the largest reservoir of mercury on the planet. Warmer air temperatures, as a result of climate change, may thaw this permafrost. The result? Large quantities of mercury could be released, that impacting human and animal health, and the ecosystem as a whole.