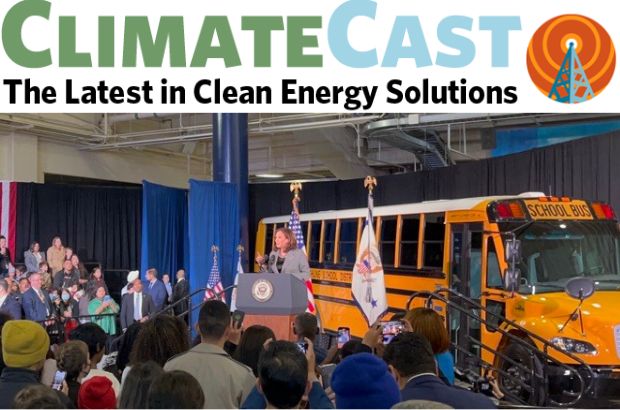 Kimberly Larson
The wheels on the electric school bus go ‘round, across the country
Jonathan Lee
October 28, 2022

The wheels on the electric school bus go ‘round, across the country

More than 25 million kids ride a school bus to school every day, and the effort to make that a clean, zero emission ride is fully underway across the US. In fact, the demand is so great and interest growing so fast, that the EPA recently doubled its available funding for electric school buses to nearly $1B. Vice President Kamala Harris and EPA Administrator Michael Regan were in Seattle this week announcing the nationwide initiative to support school districts transition existing diesel school bus fleets to electric, including four school districts in Washington State and two in Oregon, with a $5 billion program over the next five years. Only about one percent of the nation’s 480,000 school buses were electric as of last year.

But it’s not just school buses as an increasing number of public transit fleets are making the switch—New Jersey’s first electric transit bus hit the road last month, and 75 more buses are on the way. Climate Solutions staffers got to take a zero emission bus ride at the Central Washington Clean Vehicle showcase this month in Wenatchee, WA which featured a number of heavy-duty clean vehicles—school buses, transit buses, garbage trucks, and semis. And the need for transitioning continues to be prescient and urgently clear. A report this month from the American Lung Association estimates that in counties with major trucking routes, the transition to zero-emission heavy-duty transportation and clean, non-combustion energy by 2050 would result in up to $735 billion in cumulative health benefits, 66,800 avoided deaths, and 1.75 million avoided asthma attacks.

Wildfires in the Northwest led to dangerously poor air quality throughout the region, with Seattle, WA leading the world as the most polluted air quality city for several days, according to www.iqair.com. The effects of climate change directly impact kids’ ability to participate in classroom learning, let alone their regular youthful social lives and sports. Communities of color continue to be at the forefront of being affected. In the United States, a disproportionate number of children and adults of color have asthma. There was a significant uptick in hospitalizations in the greater Seattle area due to the air quality. Air pollution remains a national issue, Mon Valley, south of Pittsburgh, PA, leading the nation in poorest air quality. The danger posed to children, in general, is much greater due to their higher average breathing and growing bodies. Air pollution has also been linked as a modifiable risk factor for dementia. The Oregon Health Authority released guidelines for when folks can engage in outdoor activities. You can regularly track outdoor air quality via www.airnow.gov.

Indoor air quality is often overlooked, due to a lack of monitoring and gradual, unnoticed changes. A new study published in the Environmental Science and Technology journal found that low levels of gas leak from stoves even when they are turned off. These leaks are contributing pollutants linked to reproductive disorders, anemia, and various forms of cancer. What you can do now: air out your home, turn on the hood fan over your stove, and limit candle or incense use. Be sure to regularly change filters for your air conditioning or heat pump units. For long-term change to the quality of indoor air, consider investing in electric appliances for heating and cooking so there is no internal combustion.

The Bolt Creek fire in the western Cascades is but the latest consequence of climate change warming the west. Although the fall rains have brought some relief, particularly felt in urban centers’ air quality, wildfires continue to plague the region. It is important to remain conscious of how to deal with wildfires, as some long-standing practices don't offer solutions, like flame retardant drops from airplanes in Oregon. There is no conclusive evidence this kind of firefighting controls the spread of wildfires, and it has been directly linked to polluting rivers and streams.

Possibly perceived as perennially “blue” to those outside of Oregon, there is an incredibly tight campaign for governor this election cycle that could reverse course in climate progress depending on the outcome. In large part fueled and funded by the timber industry, and other foes to climate action, the close race means for the first time in decades, voters could elect a different party to that office. There are three candidates, including a timber-industry aligned non-affiliated candidate, and each hold very different views on what (if anything) the state should do to cut carbon pollution.

With several congressional races around the country also quite close, fossil fuel industry lobbyists are already gearing up to try to block attempts by the next Congress to address pollution from methane gas. While climate change is a top priority for many voters, even over inflation in some polls, politicians in several congressional races are not talking about climate as much as during previous elections.

Methane emissions on the rise, Oregon’s NW Natural utility rates are too

According to a recently-released report from the United Nations, the amount of methane—a climate pollutant up to 87x worse than carbon dioxide—released into our atmosphere is increasing at a rapid, unprecedented pace. Despite the growing list of nations committed to reducing emissions, the world is still polluting enough to raise global temperatures by at least 2.5°C by the end of this century. As scientists continue to research the extent to which these increases in methane emissions are due to ongoing fossil fuel use and a warming-induced climate feedback loop from nature-based sources of methane, the immediate takeaway is crystal-clear, according to Inger Andersen, executive director of the U.N. Environment Program: “In waiting so long to act on climate change, humanity has denied itself a chance to make a slow and orderly transition to a safer and more sustainable future. Countries must constantly bolster their ambitions, rather than make modest carbon-cutting pledges that get updated every five years. No nation can rest easy until every country has eliminated planet-warming emissions and restored natural systems that can pull carbon out of the atmosphere.”

VOTE AND MAKE SURE OTHERS VOTE

Climate action is on the ballot this election. Learn more about what candidates are saying they’ll do to tackle climate change, make a plan to vote and submit your ballot before your state’s deadline, and help others in your community do the same!

Sign us up for renewable power
Autumn brings no ease with climate impacts
Renewables booming, but it’s still too hot 🥵
How the West is One